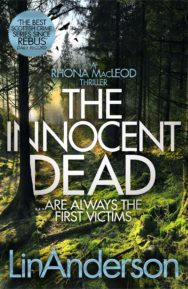 Home > Fiction from Scotland > Crime and Mystery > The Innocent Dead

The Innocent Dead is a gripping crime novel by Lin Anderson featuring forensic scientist Rhona MacLeod who must solve the case of a young girl who went missing forty-five years ago.Mary McIntyre’s disappearance tore the local community apart, inflicting wounds that still prove raw for those who knew her.So when the present-day discovery of a child’s remains are found in a peat bog south of Glasgow, it seems the decades-old mystery may finally be solved.Called in to excavate the body, forensic scientist Rhona MacLeod uses the advances made in forensic science since Mary’s vanishing to determine what really happened all those years ago . . . and who was responsible.One key person had been Karen Marshall who was devastated by her best friend’s abduction. Questioned by the police at the time had led to a dead end and the case soon went cold.Now the news of the discovered body brings the nightmares back. But added to that, memories long-buried by Karen are returning, memories that begin to reveal her role in her friend’s disappearance and perhaps even the identity of the killer . . .

Reviews of The Innocent Dead

Anderson is a master story teller; her books are always incredibly well researched and her story lines resonate with her understanding of contemporary issues and the politics of expediency * Live and Deadly * Lin Anderson is one of Scotland's national treasures – don't be fooled by comparisons, her writing is unique, bringing warmth and depth to even the seediest parts of Glasgow. Lin's Rhona MacLeod is a complex and compelling heroine who just gets better with every outing — Stuart MacBride Hugely imaginative and exciting — James Grieve (Emeritus Professor of Forensic Pathology) The bleak landscape is beautifully described, giving this popular series a new lease of life * Sunday Times * The best Scottish crime series since Rebus * Daily Record * Forensic scientist Rhona MacLeod has become one of the most satisfying characters in modern crime fiction – honourable, inquisitive and yet plagued by doubts and, sometimes, fears . . . As ever, the landscape is stunningly evoked and MacLeod's decency and humanity shine through on every page * Daily Mail *

Lin Anderson is a Scottish author and screenwriter known for her bestselling crime series featuring forensic scientist Dr Rhona MacLeod. Four of her novels have been longlisted for the Scottish Crime Book of the Year, with Follow the Dead being a 2018 finalist. Her short film River Child won both a Scottish BAFTA for Best Fiction and the Celtic Film Festival’s Best Drama Award and has now been viewed more than one million times on YouTube. Lin is also the co-founder of the international crime writing festival Bloody Scotland, which takes place annually in Stirling.