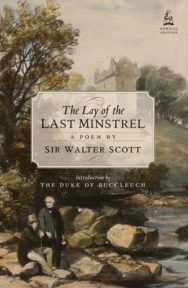 Home > Poetry, Drama, Criticism > Poetry > The Lay of the Last Minstrel: A Poem

The Lay of the Last Minstrel: A Poem

One of Sir Walter Scott’s most celebrated and accessible works, The Lay of the Last Minstrel was a huge publishing phenomenon when it first appeared in 1802, with six editions appearing in three years years and sales of 27,000 in a decade. Its impact on Border tourism was vast, as countless people, moved by Scott’s evocative description of the moonlit Melrose Abbey, flocked to the area. Painters too were inspired by the scene, and such was its fame that even prime minister William Pit recited sections from it in front of dinner guests. Told by an ageing minstrel to Ann, Duchess of Buccleuch in return for hospitality at Newark Castle, The Lay of the Last Minstrel is a powerful and dramatic tale concerning love, murder and kidnapping. A strong supernatural element lies at its heart, making it one of the most significant gothic tales ever written. This edition features an introduction by the Duke of Buccleuch.

Sir Walter Scott (1771 – 1832) was one of the most significant writers in the English language. Born in Edinburgh, he studied at the University there and began writing and publishing in the last decade of the eighteenth century. In 1811 he set about building Abbotsford, his magnificent country residence in the Scottish borders. A disastrous association with the London publisher, Constable, led to financial ruin, and only after he was declared bankrupt in1826 did he acknowledge being author of the widely published Waverley novels (Waverley, The Bride of Lammermoor, Ivanhoe etc.).