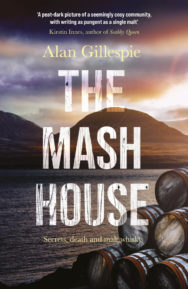 Home > Fiction from Scotland > Crime and Mystery > The Mash House

Cullrothes, in the Scottish Highlands, where Innes hides a terrible secret from his girlfriend Alice, a gorgeous, cheating, lying schoolteacher. In the same village, Donald is the aggressive distillery owner, who floods the country with narcotics alongside his single malt; when his son goes missing, he becomes haunted by an anonymous American investor intent on purchasing the Cullrothes Distillery by any means necessary. Schoolgirl Jessie is trying to get the grades to escape to the mainland, while Grandpa counts the days left in his life.

This is a place where mountains are immense and the loch freezes in winter. A place with only one road in and out. With long storms and furious midges and a terrible phone signal. The police are compromised, the journalists are scum, and the innocent folk of Cullrothes tangle themselves in a fermenting barrel of suspicion, malice and lies.

The Mash House uses multiple narratives to weave together the parallel lives of individuals in the village. Each fractured by the fears and uncertainty in their own minds.

Alan Gillespie is a writer and teacher from Fife, Scotland. He has studied at the Universities of Stirling, Glasgow and Strathclyde. His articles and stories have appeared in The New York Times, The Guardian, The Herald, Northwords Now and New Writing Scotland, and elsewhere. In 2011 he was awarded the Scottish Emerging Writer’s residency at Cove Park. The Mash House is his first novel.