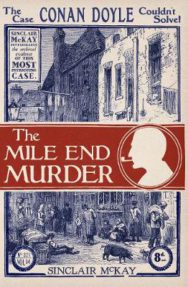 On Thursday 17 August, 1860, wealthy widow Mary Emsley was found dead in her own home,killed by a blow to the back of her head.What followed was a murder case that gripped the nation. A veritable locked room mystery, there were an abundance of suspects,from disgruntled step children concerned about their inheritance and a spurned admirer repeatedly rejected by the widow, to a trusted employee, former police officer and spy,until he was sent to prison for robbery. During the police investigation there were several twists and dramatic discoveries, as suspects sought to incriminate each other and fresh evidence was discovered at the last minute. Eventually, it led to a public trial dominated by surprise revelations and shock witnesses, before culminating with one of the final public executions at Newgate. Years later the case caught the attention of Arthur Conan Doyle, who was convinced that an innocent man had been convicted and executed for the crime. But Conan Doyle was never able to find the real murder. Now, bestselling author Sinclair McKay has solved the case and will reveal it exclusively in The Mile End Murder