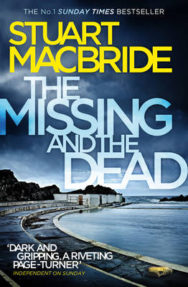 Home > Fiction from Scotland > The Missing and the Dead

The Missing and the Dead

The new Logan McRae novel from the No. 1 bestselling author of CLOSE TO THE BONE and A SONG FOR THE DYING. One mistake can cost you everything…When you catch a twisted killer there should be a reward, right? What Acting Detective Inspector Logan McRae gets instead is a ‘development opportunity’ out in the depths of rural Aberdeenshire. Welcome to divisional policing – catching drug dealers, shop lifters, vandals and the odd escaped farm animal. Then a little girl’s body washes up just outside the sleepy town of Banff, kicking off a massive manhunt. The Major Investigation Team is up from Aberdeen, wanting answers, and they don’t care who they trample over to get them. Logan’s got enough on his plate keeping B Division together, but DCI Steel wants him back on her team. As his old colleagues stomp around the countryside, burning bridges, Logan gets dragged deeper and deeper into the investigation. One thing’s clear: there are dangerous predators lurking in the wilds of Aberdeenshire, and not everyone’s going to get out of this alive…

Reviews of The Missing and the Dead

Exciting â ¦ a guaranteed bestseller' Literary Review `New Logan McRae novels are close to the top of my unmissable list, and yet again MacBride delivers. His chaotic cop hero is at his best. Superb storytelling' Sun `Another from MacBride's fantastic series of Logan McRae novels. A real page-turner' Sunday Mirror `Stuart's meticulous research shows. At times it feels like you are sitting in the back of a police car overhearing conversations between real policemen' Sunday Sport `Another riveting page-turner â ¦ emotional and affecting.' Independent on Sunday `Skilful storytelling â ¦ strong characterisation â ¦ both intriguing and engrossing' Laura Wilson, Guardian `The multiple plots move fast' Independent Praise for Stuart MacBride: `MacBride is the natural heir to the late and much lamented Reginald Hill' Andrew Taylor, Spectator `MacBride is a damned fine writer – no one does dark and gritty like him' Peter James `Fierce, unflinching and shot through with the blackest of humour; this is crime fiction of the highest order' Mark Billingham `Some of the grittiest crime-writing in the field' Independent `Admirers of tough, modern crime novels will be in seventh heaven – or should that be hell?' Express `Ferocious and funny' Val McDermid `Hard-hitting prose with a bone-dry humour and characters you can genuinely believe in, Stuart MacBride's novels are a real treat' Simon Kernick

Stuart MacBride is the Sunday Times No. 1 bestselling author of the Logan McRae and Ash Henderson novels. He was crowned World Stovies Champion in 2014 and was awarded an honorary doctorate by Dundee University in 2015. Stuart lives in the northeast of Scotland with his wife, Fiona, their cats, hens, horses, and a vast collection of assorted weeds.