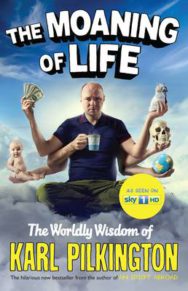 Home > Humour > The Moaning of Life: The Worldly Wisdom of Karl Pilkington

The Moaning of Life: The Worldly Wisdom of Karl Pilkington

‘I’ve been on the planet for forty years now and I’m still none the wiser as to what it’s all about really. I’ve never worried about life’s big questions. People at my age sit about pondering “why are we here?” The only time I ever asked myself that is when Suzanne booked us a surprise holiday to Lanzarote.’ Karl Pilkington is forty years old. He’s not married, he doesn’t have kids, and he’s got a job where he’s known as an ‘idiot’. It’s time for him to take stock and face up to life’s big question – what does it all mean? Karl is no stranger to travel, and now he’s off on a series of adventures around the globe to find out how other cultures approach life’s big issues. Travelling from far-flung tribes to high-tech cities, Karl experiences everything from a drive-thru wedding in Las Vegas to a vocational theme park in Japan, he meets a group of people in Mexico who find happiness through pain, undergoes a plastic surgery procedure in LA, and even encounters a woman in Bali who lets him help deliver her baby. Have his experiences changed him? Find out in this hilarious new book where Karl shares his stories (and opinions) in his inimitable style.Karl Pilkington is back on the road, and this time he’s on a journey of self-discovery…

Reviews of The Moaning of Life: The Worldly Wisdom of Karl Pilkington

* The funniest man on the planet Spectator * He's a moron. A completely round, empty-headed, part-chimp Manc — Ricky Gervais * Funniest show on TV? No contest Mail on Sunday on An Idiot Abroad * A lovely way of getting Karl's innermost thoughts on to the page in supremely satisfying style – and it's also hilarious Heat

Karl Pilkington is the author of five other bestselling books: The World of Karl Pilkington; Happyslapped by a Jellyfish; Karlology; An Idiot Abroad and The Further Adventures of An Idiot Abroad. He was part of the Guinness World Record-breaking podcast The Ricky Gervais Show, which was downloaded over 300 million times and became an animation for HBO in the USA. He also starred in three series of Sky 1’s global hit An Idiot Abroad.