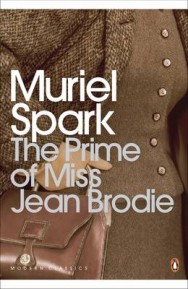 Home > Fiction from Scotland > The Prime of Miss Jean Brodie

The Prime of Miss Jean Brodie

Muriel Spark’s The Prime of Miss Jean Brodie includes an introduction by Candia McWilliam in Penguin Modern Classics. Romantic, heroic, comic and tragic, unconventional schoolmistress Jean Brodie has become an iconic figure in post-war fiction. Her glamour, unconventional ideas and manipulative charm hold dangerous sway over her girls at the Marcia Blaine Academy – ‘the creme de la creme’ – who become the Brodie ‘set’, introduced to a privileged world of adult games that they will never forget. Muriel Spark’s The Prime of Miss Jean Brodie was adapted into a successful stage play, and later a film directed by Ronald Neame and starring Maggie Smith. Muriel Spark (1918 – 2006) wrote poetry, stories, and biographies as well as a remarkable series of novels, including The Prime of Miss Jean Brodie (1961), The Mandelbaum Gate (1965) which received the James Tait Black Prize, and The Public Image (1968) and Loitering with Intent (1981), both of which were shortlisted for the Booker Prize. Spark was awarded the T.S. Eliot Award for poetry in 1992, and the David Cohen Prize for literature in 1997.If you enjoyed The Prime of Miss Jean Brodie, you might like Evelyn Waugh’s Brideshead Revisited, also available in Penguin Modern Classics. “A sublimely funny book …it is a book to be read by all …unforgettable and universal”. (Candia McWilliam, author of Debatable Land).

Muriel Spark has written poetry, stories, and biographies as well as her remarkable series of novels. She is an honorary member of the American Academy and Institute of Arts and Letters and in 1993 was created OBE. A native of Scotland, she now lives in Italy.