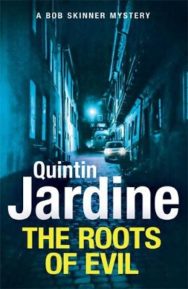 Home > Fiction from Scotland > The Roots of Evil

The Roots of Evil

Bob Skinner is back in the latest gritty mystery in Quintin Jardine’s bestselling series, not to be missed by readers of Ian Rankin and Peter May.Praise for Jardine’s gripping mysteries:’The legendary Quintin Jardine . . . such a fine writer’ Denzil Meyrick’Scottish crime-writing at its finest, with a healthy dose of plot twists and turns, bodies and plenty of brutality’ Sun’Another powerful tartan noir that packs a punch’ Peterborough Evening Telegraph’Incredibly difficult to put the book down . . . a guide through a world of tangled family politics, hostile takeovers, government-sanctioned killing, extortion and the seedier side of publishing . . . Quintin Jardine should be . . . your first choice!’ Scots magazine’Well constructed, fast-paced, Jardine’s narrative has many an ingenious twist and turn’ Observer

Quintin Jardine was born once upon a time in the West – of Scotland rather than America, but still he grew to manhood as a massive Sergio Leone fan. On the way there he was educated, against his will, in Glasgow, where he ditched a token attempt to study law for more interesting careers in journalism, government propaganda, and political spin-doctoring. After a close call with the Brighton Bomb in 1984, he moved into the even riskier world of media relations consultancy, before realising that all along he had been training to become a crime writer. Now, forty novels later, he never looks back.Along the way he has created/acquired an extended family in Scotland and Spain. Everything he does is for them.He can be tracked down through his blog: http://quintinjardine.me