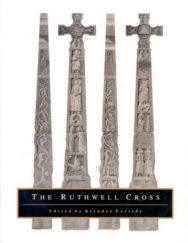 The Ruthwell Cross: Papers from the Colloquium Sponsored by the Index of Christian Art, Princeton University, 8 December, 1989

The Ruthwell Cross is a late 7th-or 8th-century high cross in the kirk at Ruthwell in the Scottish Borders. It is one of the most intriguing examples of sculpture to survive from the early Middle Ages. With its Latin inscriptions, a Runic poem related to the “Dream of the Rood”, and an extensive programme of finely carved images, the cross has long attracted the interest of scholars from a variety of disciplines. Bringing together papers delivered at a conference sponsored by the Index of Christian Art in Princeton in 1990, this illustrated volume addresses some of the most debated issues surrounding this major literary and artistic monument of Anglo-Saxon culture. The volume begins with an introduction to the historiography of the cross by Brendan Cassidy. Robert T.Farrell discusses the fate of the cross from the 17th-century, its current state of preservation, and its reconstruction; David Howlett uncovers patterns of significance in the Latin and Runic inscriptions; Douglas MacLean suggests the most likely date of the cross on the basis of contemporary historical events; and Paul Meyvaert addresses the message of the iconographic programme in the light of the theology and relig

Reviews of The Ruthwell Cross: Papers from the Colloquium Sponsored by the Index of Christian Art, Princeton University, 8 December, 1989

"The Princeton Index of Christian art series has a spectacular start with this beautifully produced large-format volume, which provides both an analysis of the ever-fascinating Ruthwell cross and also some virtuoso scholarship on its date and iconography."–"Paragon"