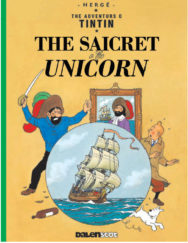 The Saicret o the Unicorn

By Herge; Translated by Susan Rennie

Lang-syne, in the pirate-infestit Caribbean, ane o Captain Haddie’s forefaithers had a bonnie fecht wi the bluidthristy pirate, Reid Ranald. His ship, the Unicorn, wis tint an sank tae the deeps, alang wi the pirate’s sprecherie. But whan Tintin finds a model o the warship, a clue appears that micht can lead tae the location o the treisure. Will Tintin be able tae solve the riddlum an unlock the saicret?

The first o a twa-pairt story continuit in The Treisure o Reid Ranald.

Long ago, in the pirate-infested waters of the Caribbean, one of Captain Haddie’s ancestors was embroiled in a battle against the infamous privateer Reid Ranald. His ship, the Unicorn, was lost to the deep along with the pirate’s booty, but when Tintin finds a model of the warship, a clue appears which could lead to the treasure’s location… will Tintin be able to decipher the mystery?

The first of a two-part story concluding in The Treisure o Reid Ranald.