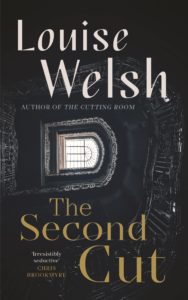 Home > Fiction from Scotland > Crime and Mystery > The Second Cut

Auctioneer Rilke has been trying to stay out of trouble, keeping his life more or less respectable. Business has been slow at Bowery Auctions, so when an old friend, Jojo, gives Rilke a tip-off for a house clearance, life seems to be looking up. The next day Jojo washes up dead.

Jojo liked Grindr hook-ups and recreational drugs – is that the reason the police won’t investigate? And if Rilke doesn’t find out what happened to Jojo, who will?

Thrilling and atmospheric, The Second Cut delves into the dark side of twenty-first century Glasgow. Twenty years on from his appearance in The Cutting Room, Rilke is still walking a moral tightrope between good and bad, saint and sinner.

Louise Welsh is an award-winning author of eight novels. The Cutting Room, her debut novel, won the Crime Writers’ Association John Creasey (New Blood) Dagger Award and the Saltire First Book of The Year Award. In 2018, she was named the Most Inspiring Saltire First Book Award winner by public vote. She is Professor of Creative Writing at the University of Glasgow. @louisewelsh00