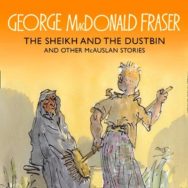 Home > Fiction from Scotland > The Sheikh and the Dustbin (The McAuslan Stories, Book 3)

The Sheikh and the Dustbin (The McAuslan Stories, Book 3)

Private McAuslan was ‘the biggest walking disaster to hit the Army’. Loosely based on his own experiences in a Scottish regiment, and written with rare humour, a sense of the ludicrous and real affection for soldiering, the third volume of George MacDonald Fraser’s McAuslan trilogy now finally comes to life on audio.Private McAuslan’s admirers already know him as court-martial defendant, ghost-catcher, star-crossed lover and golf caddie extraordinary; in this third and final volume of army memoirs he appears as the most unlikely of batmen to his long-suffering protector and persecutor, Lieutenant Dand MacNeill; as guardroom philosopher and adviser to the leader of the Riff Rebellion; and even as Lance Corporal McAuslan, the Mad Tyrant of Three Section! Whether map-reading his erratic way through the Sahara by night or confronting Arab rioters, McAuslan’s talent for catastrophe is as sure as ever.Private McAuslan, J., The Dirtiest Soldier in the World (alias the Tartan Caliban) first demonstrated his unfitness for the service in THE GENERAL DANCED AT DAWN. He continued his disorderly advance, losing, soiling or destroying his equipment, through the pages of’ McAUSLAN IN THE ROUGH. Finally, THE SHEIKH AND THE DUSTBIN ‘pursues the career of the great incompetent as he bauchles (see Glossary) across North Africa and Scotland, swinging his right arm in time with his right leg and tripping over his untied laces.Based on MacDonald Fraser’s own experiences in the Border Regiment and the Gordon Highlanders, which took him to India, Africa and the Middle East, these stories demonstrate the celebrated author of the swashbuckling FLASHMAN series at his hilarious best.

Reviews of The Sheikh and the Dustbin (The McAuslan Stories, Book 3)

'Thanks to Fraser's passion for history, his rare gift for rattling narrative and his infectious delight in robust, rollicking language, we can rejoice in a work of genius worthy of being ranked with P.G. Wodehouse – there can be no higher accolade'-Daily Telegraph'Written with the kind of unaffected vigour which has characterised the greatest British humorists, these stories do for the Scots what Flann O'Brien did for the Irish and P.G. Wodehouse for the English'-Daily Mail'The third McAuslan volume should certainly be among the first books you pack this or any other holiday season'-The Times'One takes leave of these characters with real and grateful regret'-Sunday Times'It's a while since I enjoyed a book so much, and once I'd finished it, I felt like starting it all over again'-Glasgow Evening Times'It's great fun and rings true: a Highland Fling of a book'-Eric Linklater, author of The Wind on the Moon'The greatest book about soldiers since Ian Hay wrote The First Hundred Thousand … MacDonald Fraser is magnificent'-Eric Hiscock, author of Around the World in Wanderer III'As well as providing a fine assortment of treats, George MacDonald Fraser is a marvellous reporter and a first-rate historical novelist'-Kingsley Amis, author of Lucky Jim

Best known as the author of the famous Flashman Papers, George MacDonald Fraser (1925-2008) served in both the Border Regiment in Burma during the war and in the Gordon Highlanders. After the war he worked on newspapers in Britain and Canada, and became deputy editor of the Glasgow Herald. In addition to his novels and works of non-fiction, he wrote numerous screenplays, most notably The Three Musketeers, Royal Flash and the James Bond film, Octopussy, and worked on scripts including Force 10 from Navarone and Superman II.