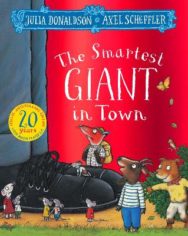 Meet the kindest giant around and all his animal friends in this special twentieth anniversary edition of the bestselling story The Smartest Giant in Town by Julia Donaldson and Axel Scheffler, featuring the much-loved original story plus special bonus content.George wished he wasn’t the scruffiest giant in town. So when he sees a new shop selling giant-sized clothes, he decides it’s time for a new look: smart trousers, smart shirt, stripy tie and shiny shoes. Now he’s the smartest giant in town . . . until he bumps into some animals who desperately need his help – and his clothes!The Smartest Giant in Town 20th Anniversary Edition features the classic story by Julia Donaldson and Axel Scheffler, creators of The Gruffalo, as well as extra-special bonus content to celebrate the anniversary year.

Julia Donaldson is the author of some of the world’s best-loved children’s books, including modern classics The Gruffalo and The Gruffalo’s Child, which together have sold over 27.5 million copies worldwide, and the hugely successful What the Ladybird Heard adventures. Julia also writes fiction, including the Princess Mirror-Belle books illustrated by Lydia Monks, as well as poems, plays and songs – and her brilliant live shows are always in demand. She was Children’s Laureate 2011-13 and has been honoured with a CBE for Services to Literature. Julia and her husband Malcolm divide their time between West Sussex and Edinburgh.Axel Scheffler is a star illustrator whose instantly recognizable, warm and witty illustrations have achieved worldwide acclaim and numerous awards. In addition to his picture books, Axel is the illustrator of wonderful novelty and gift books for Macmillan, such as the bestselling The Bedtime Bear, The Tickle Book and Mother Goose’s Nursery Rhymes. He also illustrates the popular Pip and Posy series. Born in Hamburg, Axel now lives with his family in London.