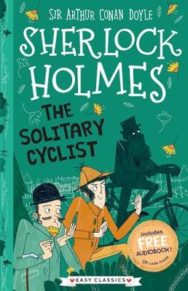 An illustrated adaptation of Sir Arthur Conan Doyle’s classic Sherlock Holmes mystery – at an easy-to-read level for readers of all ages! Also includes a QR code for the free audiobook!Dear Mr Holmes,It has happened again. The strange bearded man on the bicycle followed me this morning. I tried suddenly turning and racing towards him, but he was just as quick.When Violet Smith gets a new job, a new friend and a new home, life seems almost perfect … until the solitary cyclist appears. He follows her every week, along the same stretch of road. Why? That’s what Holmes and Watson need to work out, before this seemingly simple case turns into something far more sinister.