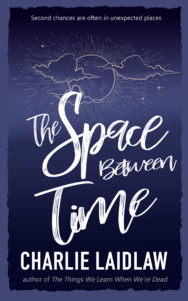 Home > Fiction from Scotland > The Space Between Time

The Space Between Time

Emma Maria Rossini appears to be the luckiest girl in the world.  She’s the daughter of a beautiful and loving mother and her father is one of the most famous film actors of his generation.  Tom Cruise is almost an adopted uncle.

She’s also the granddaughter of a rather eccentric and obscure Italian astrophysicist whose theories on the universe have been much ridiculed.

The story centres on Emma’s childhood in Edinburgh and East Lothian, and the overpowering event of her mother’s death, apparently in a freak lighting strike.

However, the secret that only Emma knows is that her mother’s death was no accident. It precipitates a suicide attempt, and estrangement from her father.

Emma stumbles through university and finds work as a journalist in Edinburgh, although she is once more becoming mentally unstable and, following the death of her father, again tries to commit suicide.

It’s while she’s in a mental institution that her psychiatrist suggests she writes a memoir of her life, to help her make sense of everything that’s happened to her, and The Space Between Time is the story she writes.

The tragic-comic story, aimed at both male and female readers, has heart, humour and warmth. Its central message is that, even at the worst of times, a second chance can often be just around the corner.

In coming to terms with her life and the deaths of her parents, Emma finds ultimate solace in her once-derided grandfather’s Theorem on the universe – which offers the metaphor that we are all connected, even to those we have loved and not quite lost.

Charlie Laidlaw was born in Paisley and is a graduate of the University of Edinburgh. He has been a national newspaper journalist and worked in defence intelligence. He now runs his own marketing consultancy in East Lothian. He is married with two grown-up children.