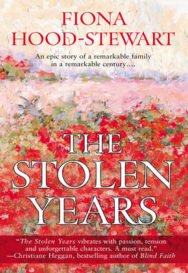 Spanning three generations and a century of love, loss and longing, The Stolen Years is a stunning tale of secrets and betrayals, of an empire forged from the seeds of revengeâ ¦and the legacy that withstood it all.On the battlefields of World War I, twin brothers Gavin and Angus MacLeod are torn apart in one horrific instant that changes their lives forever. Believing his brother dead, a shattered, tormented Angus returns home to Scotland and takes his place as heir to the family title and husband to his brother’s fiancee.But Gavin has survived. Believing he was betrayed by his twin, he creates a new identity for himself in America. And as he helms an elite china empire through decades of war and turbulence, peace and prosperity, he nurses a bitter obsession for revenge.Fate and one remarkable woman will unite the brothers’ lives in astonishing unforeseen ways. Yet the children of these men will bear the sins of their fathers. And as the twenty-first century dawns, the secrets that have shaped their destinies will finally be revealed.

Fiona Hood-Stewart credits her mother with putting her on the path to becoming a writer, who encouraged her to read avidly! Fiona has led a somewhat cosmopolitan life – schooled in Switzerland and fluent in seven languages, she draws on her own experiences in the world of old money, big business and the international jet set for inspiration in creating her books. Fiona lives on a stud ranch in Brazil with her two sons. Readers can visit her at: www.fiona-hood-stewart.com