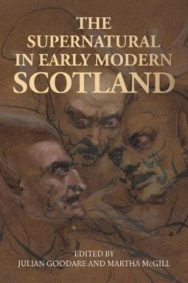 The Supernatural in Early Modern Scotland

This book is about other worlds and the supernatural beings, from angels to fairies, that inhabited them. It is about divination, prophecy, visions and trances. And it is about the cultural, religious, political and social uses to which people in Scotland put these supernatural themes between 1500 and 1800. The supernatural consistently provided Scots with a way of understanding topics such as the natural environment, physical and emotional wellbeing, political events and visions of past and future. In exploring the early modern supernatural, the book has much to reveal about how men and women in this period thought about, debated and experienced the world around them. Comprising twelve chapters by an international range of scholars, The supernatural in early modern Scotland discusses both popular and elite understandings of the supernatural. — .