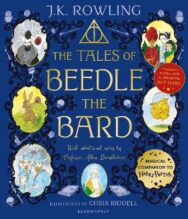 Home > Academic > Arts and Humanities > The Tales of Beedle the Bard – Illustrated Edition: A magical companion to the Harry Potter stories

The Tales of Beedle the Bard – Illustrated Edition: A magical companion to the Harry Potter stories

An essential companion to the Harry Potter books, The Tales of Beedle the Bard is a collection of fairytales from the wizarding world, via the enchanted pen of J.K. Rowling. Rich with allusions and symbols from the Harry Potter stories, and enhanced with fascinating commentary from beloved sage Professor Albus Dumbledore, this is a Hogwarts Library book to treasure and enjoy for years to come. All of the gorgeous, grim and gothic detail of the Bard’s five bewitching tales has been brought to life by Chris Riddell, thrice winner of the Kate Greenaway Medal. Much loved by generations of witches and wizards, and translated from the original runes by Hermione Granger, this beautiful edition is the perfect gift for Harry Potter fans.Mischievous and witty, Beedle the Bard’s stories are a deeply satisfying read in the tradition of all great fables and fairytales. Kindnesses are rewarded and selfishness shown to be the ruin of many a wizard. Burping cauldrons, hairy hearts and cackling stumps are met along the way. Each tale is brought vividly to life with Riddell’s trademark wry humour and elegance, including ‘The Tale of the Three Brothers’, familiar to readers of Harry Potter from the crucial role it plays in Harry Potter and the Deathly Hallows.Now available in a paperback format featuring a brand new cover by Chris Riddell, this edition contains all of the mesmerising illustrations from the original hardback plus an exclusive additional art print of Harry, Ron and Hermione for readers to take out and keep. Prepare to be spellbound!The Tales of Beedle the Bard is published in aid of Lumos, an international children’s charity founded in 2005 by J.K. Rowling.

J.K. Rowling is best known as the author of the seven Harry Potter books, which were published between 1997 and 2007. The enduringly popular adventures of Harry, Ron and Hermione have gone on to sell over 500 million copies, be translated into over 80 languages and made into eight blockbuster films. Alongside the Harry Potter series, she also wrote three short companion volumes for charity: Quidditch Through the Ages and Fantastic Beasts and Where to Find Them, in aid of Comic Relief and Lumos, and The Tales of Beedle the Bard, in aid of Lumos. J.K. Rowling collaborated with playwright Jack Thorne and director John Tiffany to continue Harry’s story in a stage play, Harry Potter and the Cursed Child, which opened in London in 2016 and is now playing worldwide. In the same year, she made her debut as a screenwriter with the film Fantastic Beasts and Where to Find Them, the first in a series featuring Magizoologist Newt Scamander, which was inspired by the original companion volume. J.K. Rowling has also written a standalone novel, The Casual Vacancy, and is the author of the Strike crime series under the pseudonym Robert Galbraith. Both have been adapted for television. She has received many awards and honours, including an OBE and a Companion of Honour for services to literature and philanthropy. She lives in Scotland with her family.Chris Riddell is an award-winning illustrator and acclaimed political cartoonist. He is currently the only artist to have won the Kate Greenaway Medal three times, most recently for his illustrations in Neil Gaiman’s The Sleeper and the Spindle. Chris Riddell was Waterstones Children’s Laureate from 2015 to 2017 and has recently been announced as a BookTrust ambassador. He has illustrated the work of many celebrated children’s authors, including five Neil Gaiman titles. He is the author of the bestselling Goth Girl and Ottoline series and co-creator of the much loved The Edge Chronicles.