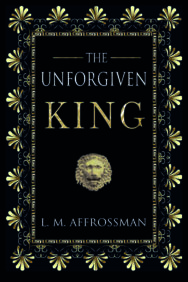 The story of the woman, who stripped away the legend to reveal the man.

Cleopatra, Julius Caesar, Herod the Great, well-known names. But, hiding between the lines of history, are others waiting to tell their stories. Forgotten for millennia, Loshema, the slave who became royalty, charts the rise and fall of those around her, while following her own dangerous trajectory through the political intrigue of the courts of the first century BC.

This is a world full of passion, bloodshed, madness and treachery, and just for the briefest, most fleeting of moments, love.

L. M. Affrossman has published a number of short stories in the past, and her debut novel, The Promise, focussed on the relationship between a small boy and an elderly survivor of Stalinist Russia. Her second novel, Simon’s Wife, focussed on the destruction of the Second Temple through the eyewitnesses of the time. She is also known for her work in drama, and her most recent work is with the theatre company, Schultz and Schirm.