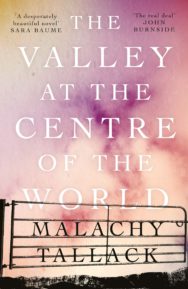 The Valley at the Centre of the World

Set against the rugged west coast of Shetland, this is a novel about family and inheritance, rapid change and an age-old way of life. The exquisite debut novel from one of Scotland’s most exciting new writers.

Shetland: a place of sheep and soil, of harsh weather, close ties and an age-old way of life. A place where David has lived all his life, like his father and grandfather before him. A place that Alice has fled to after the death of her husband. A place where Sandy, a newcomer but already a crofter, may have finally found a home. But times do change, and the valley that they all call home must change with them, or be forgotten.

The debut novel from one of our most exciting new literary voices, The Valley at the Centre of the World is a story about community and isolation, about what is passed down, and what is lost between the cracks.

Malachy Tallack is the author of two non-fiction titles, 60 Degrees North and The Un-Discovered Islands. Both fused nature writing, history and memoir; the first was shortlisted for the Saltire First Book Award and the second was named Illustrated Travel Book of the Year at the Edward Stanford Travel Writing Awards in 2016. Malachy won a New Writers Award from the Scottish Book Trust in 2014 and the Robert Louis Stevenson Fellowship in 2015. He is a singer-songwriter as well as a writer and journalist and lives in Glasgow.