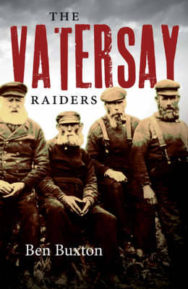 All they wanted was land: land for crofting and land on which to build a house. In 1908, ten desperate men from the islands of Barra and Mingulay in the Western Isles were imprisoned for refusing to leave the island of Vatersay which they had raided, building huts and planting potatoes without permission. The case caused an outcry across Scotland, and the government eventually bought Vatersay for crofting.This book, the first about Vatersay, draws on detailed records to tell the remarkable story of the raiders: their struggle to escape from the poverty which, they claimed, the policies of the absentee landowner forced them to endure, the raiding and settlement of the island and the fraught process of dividing it up into crofts. An outline of subsequent developments in Vatersay, including the causeway, brings the account up to date. The book also documents the fascinating earlier history of Vatersay and its now-deserted neighbour Sandray. The story ranges from the intriguing monuments of prehistory to the shipwrecks and the 19th century evictions to make way for sheep-farming.

Ben Buxton first explored the Barra Isles in the 1970s. Later, while studying for a degree in archaeology, he investigated the archaeology and history of Mingulay. In 1995 Mingulay: An Island and its People was published by Birlinn. This was joint winner of the Michaelis-Jena Ratcliffe Prize for Folklife in 1997. Ben Buxton now lives in Dorset, where he teaches adult education classes in archaeology.