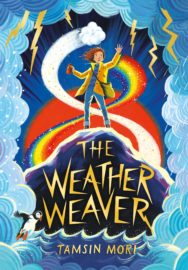 Tamar held up one hand, as though hailing a bus. Her purple cardigan billowed around her. She pinched her finger and thumb together, and the wind stopped…

What if you could befriend a cloud? What weather would you choose? What would happen if the weather matched itself to your mood, whether you wanted it to, or not?

11-year-old Stella has returned home to Shetland to spend the summer with Grandpa, but it’s nothing like she remembers. Grandpa is lost in his grief for Gran, the island is bleak and Stella feels lonely and trapped. That is until she encounters an old woman, Tamar, who, to Stella’s amazement, can spin rainbows and call hurricanes.

Soon Stella discovers that she too is a Weather Weaver. With the help of Nimbus, a feisty young storm cloud, Stella begins to learn the craft of weather weaving. But when Nimbus brain-fogs Grandpa and The Haken, a local sea witch, starts to close in on the island, she realises that with magic comes big responsibilities.

Drawing on the elements, island myths and the natural world, The Weather Weaver by debut author Tamsin Mori is a magical tale  so rooted in the everyday that young readers will think it entirely possible that they too can conjure up a rainbow outside their window, or catch a cloud of their very own.

Tamsin lives in Bath with her husband, two children, one rabbit, several crows, and a badger, though she still flies home to Shetland whenever she can. If you go there in the summer, you’ll probably spot her, striding about with the wind in her hair, chasing a wild story.