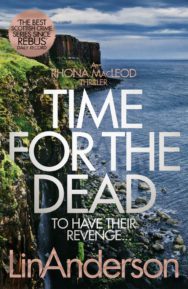 Home > Fiction from Scotland > Crime and Mystery > Time for the Dead

Time for the Dead

Time for the Dead is a gripping crime novel by Lin Anderson and sees forensic scientist Rhona MacLeod discover that a terrifying war is unfolding on Scotland’s Isle of Skye.

When forensic scientist Rhona MacLeod returns to her roots on Scotland’s Isle of Skye, a chance encounter in the woods behind a nearby activities centre leads her to what seems to be a crime scene, but without a victim. Could this be linked to a group of army medics, who visited the centre while on leave from Afghanistan and can no longer be located on the island?

Two days later a body is found at the base of the famous cliff known as Kilt Rock, face and identity obliterated by the fall, which leads Rhona to suspect the missing medics may be on the island for reasons other than relaxation. Furthermore, elements of the case suggests a link with an ongoing operation in Glasgow, which draws DS Michael McNab into the investigation.

As the island’s unforgiving conditions close in, Rhona must find out what really happened to the group in Afghanistan, as the consequences may be being played out in brutal killings on Skye . . .

Lin Anderson is a Scottish author and screenwriter known for her bestselling crime series featuring forensic scientist Dr Rhona MacLeod. Four of her novels have been longlisted for the Scottish Crime Book of the Year, with Follow the Dead being a 2018 finalist. Her short film River Child won both a Scottish BAFTA for Best Fiction and the Celtic Film Festival’s Best Drama award and has now been viewed more than one million times on YouTube. Lin is also the co-founder of the international crime writing festival Bloody Scotland, which takes place annually in Stirling.