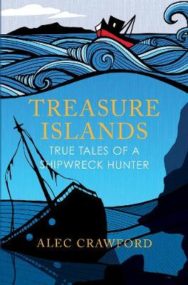 In 1971 Alec Crawford is determined to make his fortune from ship salvage. Early attempts lead nowhere until he teams up with a new partner, Simon Martin. Diving in Hebridean waters, they explore remains of the Spanish Armada, and the wreck of the SS Politician, the vessel made famous in the Whisky Galore. But money is scarce and irregular, and the work is fraught with danger and disappointment.Until they hear of one of the most incredible wrecks of all time – the White Star Liner Oceanic, which, when built in 1899, was the biggest and most luxurious ship in the world. Widely regarded as an ‘undiveable’ wreck, lying somewhere off the remote island of Foula, they decide to take the challenge. They face unbelievably dangerous waters and appalling weather conditions, and when a large salvage company takes action against them, they also have a huge legal fight on their hands. But if they succeed, the rewards will be enormous…

Reviews of Treasure Islands: True Tales of a Shipwreck Hunter

'Crawford pioneered many of the methods now used in deep sea recovery, but this book is more about the excitement than the technicalities. It is also a love song to Scotland and a vanishing way of life' * Sorted Magazine * 'Crawford has had a long career in rescuing sometimes very valuable stuff from deep water, but his book Treasure Islands tells the story of the early days, diving on shallow wrecks in the Forth, the Western Isles and Shetland…Going down there and rummaging through things… you must have been conscious of the danger but it sounds quite Wild West' * BBC Radio Scotland * 'The combination of proper adventure, sunken treasure, Scottish islands, memories of fragile communities, the affection this book is written with, and the pleasure of spending time in the company of someone who's achieved some really notable things gives this book a much broader appeal than you might initially suppose … It's a story of genuine adventure … Highly recommended' * Desperate Reader Blogspot * 'Crawford is a born story-teller, and his tales unfold as easily and naturally as he were an old friend' * The Shetland Times * 'Absorbing … Crawford writes of difficult and very dangerous work with a good deal of sangfroid. Good humour and an absence of hyperbole make this an unusually likeable, as well as interesting, memoir' — Allan Massie * Scotsman *

Alec Crawford has spent his whole career in the world of marine salvage in various locations around the world, including the UK, USA, Vietnam, South Africa and all through the Mediterranean. He has also been actively involved in the development of salvage technology, including an environmental oil removal system that was used to remove oil from shipwrecks, which was highlighted in the Timewatch documentary, The Lost Liner and the Empire’s Gold.