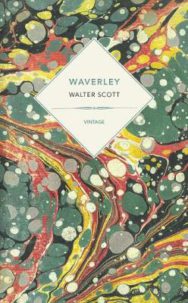 The first historical novel – this tale of romance and adventure during the 1745 Jacobite rebellion will stir the blood and warm the heart. King George is on the throne, but there are those in Scotland who swear loyalty to the Stuart heir, Bonnie Prince Charlie, and are prepared to stake his claim in conflict and bloodshed. Young Edward Waverley is caught in the middle: son of a Hanoverian yet nephew and heir to a Jacobite, a captain in the King’s army yet drawn to the brave Highlanders and their romantic history. Edward must choose where his loyalties lie, even as his heart is torn between gentle Rose Brawardine, and the passionate, principled Flora Mac-Ivor.

Walter Scott was born in Edinburgh on 15 August 1777. He was educated in Edinburgh and called to the bar in 1792, succeeding his father as Writer to the Signet, then Clerk of Session. He published anonymous translations of German Romantic poetry from 1797, in which year he also married. In 1805 he published his first major work, a romantic poem called “The Lay of the Last Minstrel, ” became a partner in a printing business, and several other long poems followed, including” Marmion” (1808) and “The Lady of the Lake “(1810). These poems found acclaim and great popularity, but from 1814 and the publication of “Waverley,” Scott turned almost exclusively to novel-writing, albeit anonymously. A hugely prolific period of writing produced over twenty-five novels, including “Rob Roy” (1817), T”he Heart of Midlothian “(1818), ” The Bride of Lammermoor” (1819), “Kenilworth” (1821) and “Redgauntlet” (1824). Already sheriff-depute of Selkirkshire, Scott was created a baronet in 1820. The printing business in which Scott was a partner ran into financial difficulties in 1826, and Scott devoted his energies to work in order to repay the firm s creditors, publishing many more novels, dramatic works, histories and a life of Napoleon Bonaparte. Sir Walter Scott died on 21 September 1832 at Abbotsford, the home he had built on the Scottish Borders.”