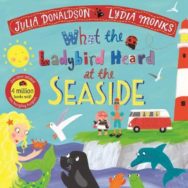 Home > Children's > What the Ladybird Heard at the Seaside

What the Ladybird Heard at the Seaside