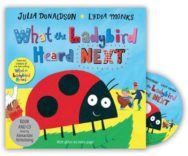 Home > Children's > Fiction > What the Ladybird Heard Next

What the Ladybird Heard Next

Once upon a farm lived a ladybird,And these are the things that she saw and heardThose crafty robbers Hefty Hugh and Lanky Len are out of jail, and they’re heading back to the farm with another cunning plan to cause trouble. They’ve been stealing eggs from the fat red hen, but now they’re setting their sights higher and are planning to steal the fat red hen herself! Fortunately the quiet, clever ladybird is on their trail, and she and her farm animal friends have a plan of their own.Join the cow, the goose, the horse, the sheep, the cat, and everyone’s favourite ladybird in this fantastically funny farmyard caper – a much anticipated sequel to the hugely successful What the Ladybird Heard, which has sold over a million copies worldwide.Children will love the gorgeously glittery eye-catching cover, and spotting the sparkly ladybird on every page. With slapstick action, animal noises, and a mysterious Snuggly Snerd bird, What the Ladybird Heard Next is destined to become yet another classic in the Julia Donaldson and Lydia Monks collection.Praise for What the Ladybird Heard:”Bursting with colour and verve” – Daily Telegraph”A terrific and witty adventure” – The Guardian

Julia Donaldson is the outrageously talented, prize-winning author of the world’s best-loved picture books, and was the 2011-2013 UK Children’s Laureate. Her books include Sharing a Shell, the bestselling smash-hit What the Ladybird Heard and the modern classic The Gruffalo, which has sold over 13.5 million copies worldwide and has been translated into over sixty languages. Julia also writes fiction as well as poems, plays and songs and her brilliant live children’s shows are always in demand. Julia and her husband Malcolm divide their time between Sussex and Edinburgh.Lydia Monks is one of the most original picture book artists working today. Her distinctive use of colour and collage has won her critical acclaim and several awards, including the Smarties Prize. Her collaborations with Julia Donaldson include The Singing Mermaid, the Princess Mirror-belle books, Sugarlump and the Unicorn, and the phenomenally successful What the Ladybird Heard. Lydia lives in Sheffield.