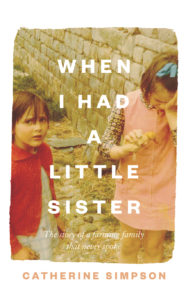 When I Had a Little Sister

When I Had a Little Sister is a searingly honest and wryly heartbreaking memoir about a Lancashire farming family, whose love of their land came hand in hand with the resilience to live off it. It’s a story of sisters and sacrifice, grief and reclamation, and of the need to speak the unspeakable.

Did she know what she was doing?

On a cold December day in 2013 Catherine Simpson received the phone call she had feared for years. Her little sister Tricia had been found dead in the farmhouse where she, Catherine and their sister Elizabeth were born – and where their family had lived for generations.

Tricia was 46 and had been stalked by depression all her life. Yet mental illness was a taboo subject within the family and although love was never lacking, there was a silence at its heart.

After Tricia died, Catherine found she had kept a lifetime of diaries. The words in them took her back to a past they had shared, but experienced so differently, and offered a thread to help explore the labyrinth of her sister’s suicide.

Reviews of When I Had a Little Sister

‘Catherine Simpson’s memoir of her sister Tricia’s suicide mixes the coolness of her journalistic training with the subjective pain of loss in dreadful circumstances. But something else is on these pages: frustration and anger – with Tricia, with herself and with other relatives – that if only the family tradition of silence and the suppression of feelings had been challenged earlier things might have been different. In analysing the inherited values and habits of a lifetime, Simpson breaks the silence and liberates herself’
James Robertson, author of And the Land Lay Still

‘When I Had a Little Sister, Catherine Simpson’s second book, carries a subtitle – “The Story of a Farming Family who Never Spoke.” Don’t be fooled. This book’s secret weapon – alongside the strength and power of its story – is the remarkable voice that fires from the page to the heart with no hesitation at all. Just Wonderful.’
Janice Galloway, author of The Trick is to Keep Breathing

‘Catherine Simpson’s memoir of her younger sister’s suicide is nothing less than an excavation of her family archaeology: a bold attempt to answer the question of how we become the people we are. Simpson is brilliant on the memories evoked by the accumulated junk left behind by the dead; she’s brilliant on the weird dynamics of family relationships; but most of all she brilliant at directing her clear-eyed gaze at the stuff we often prefer to turn away from. There are moments here of heart-stopping poignancy and unbearable sadness, but it is never maudlin or sentimental. Simpson is too good a writer for that, and it is her restraint and phlegmatic humour which lend the book its tremendous power. A deeply engaging, courageous and human work.’
Graeme Macrae Burnet, author of His Bloody Project

‘Brave and elegiac… ultimately it’s a story of what it’s like to love someone with a mental illness’
Caroline Sanderson, Editor’s Choice, Bookseller

Catherine Simpson’s debut novel, Truestory (Sandstone Press, 2015) won her a Scottish Book Trust New Writer’s Award. It was inspired by her experiences raising her autistic daughter Nina. She and Nina now campaign for Autism Acceptance. In 2016 Catherine received a Hawthornden Fellowship. Born and brought up on a Lancashire farm, Catherine lives in Edinburgh.