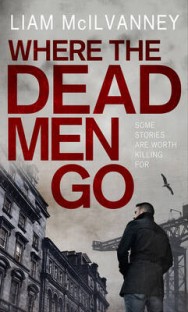 Home > Fiction from Scotland > Where the Dead Men Go

Where the Dead Men Go

After three years in the wilderness, hardboiled reporter Gerry Conway is back at his desk at the Glasgow Tribune. But three years is a long time on newspapers and things have changed – readers are dwindling, budgets are tightening, and the Trib’s once rigorous standards are slipping. Once the paper’s star reporter, Conway now plays second fiddle to his former protege, crime reporter Martin Moir. But when Moir goes AWOL as a big story breaks, Conway is dispatched to cover a gangland shooting. And when Moir’s body turns up in a flooded quarry, Conway is drawn deeper into the city’s criminal underworld as he looks for the truth about his colleague’s death. Braving the hostility of gangsters, ambitious politicians and his own newspaper bosses, Conway discovers he still has what it takes to break a big story. But this is a story not everyone wants to hear as the city prepares to host the Commonwealth Games and the country gears up for a make-or-break referendum on independence. In this, the second book in the Conway Trilogy, McIlvanney explores the murky interface of crime and politics in the new Scotland.

Reviews of Where the Dead Men Go

A terrific, ultra-modern crime novel … delivered in lyrical, emotive and often piercing prose, it's an assured and classy addition to the ranks of Scotland's crime-writing scene. — Doug Johnstone Independent on Sunday 'This novel reveals a talent that outshines even his famous relatives. The novel's appetite for the life and language of Glasgow is intoxicating. McIlvanney evokes the city's dark underbelly with razor-like accuracy, and the novel roars off the page like a wild beast on the loose … superb storytelling, a wonderful eye for character, and a passion for dialogue, it announces the arrival of a Scots poet of the thriller. — Geoffrey Wansell Daily Mail 'Is there no end to the procession of Scottish writers excelling in the crime genre? In his second novel, Where the Dead Men Go, Liam McIlvanney shows himself to be in the same league as his illustrious compatriots … McIlvanney tells the story with clarity, terrific dialogue and convincing characters. — Marcel Berlins The Times WHERE THE DEAD MEN GO is a well written novel, full of believable characters and dialogue. The pace of the book is a slow build up to an exciting conclusion … Recommended. eurocrime.co.uk

Liam McIlvanney was born in Ayrshire. He is the author of Burns the Radical and All the Colours of the Town. He lives in Dunedin with his wife and four sons.