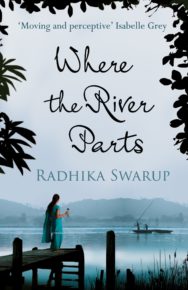 Home > Fiction from Scotland > Where the River Parts

Blood had begun to trickle down Asha’s starched cotton salwar, and once more she tried to will herself to stay calm. It was nothing. These things happened.

But these things haven’t happened before. It’s August 1947, the night before India’s independence. It is also the night before Pakistan’s creation and the brutal Partition of the two countries. Asha, a Hindu in a newly Muslim land, must flee to safety. She carries with her a secret she has kept even from Firoze, her Muslim lover, but Firoze must remain in Pakistan, and increasing tensions between the two countries mean the couple can never reunite. Fifty years later in New York, Asha’s Indian granddaughter falls in love with a Pakistani, and Asha and Firoze, meeting again at last, are faced with one more final choice.