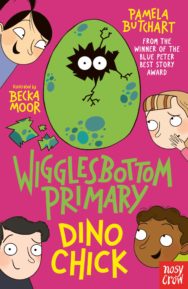 The strangest things happen at Wigglesbottom Primary! When Year Two is chosen to look after some eggs that are about to hatch, they KNOW somthing is strange about one of them. What if it’s not a chick egg, but a DINOSAUR EGG???

Pamela Butchart lives in Dundee with her baby boy and their two awesome cats, Bear & Carlos. If she wasn’t working as a writer and a teacher she’d like to open a luxury hotel for stray cats.

As a child, Pamela was lucky enough to grow up in a house full of pets and go to a primary school where lots of spooky and weird things happened (well, in her imagination at least). As a student, Pamela’s student jobs included: fishwife, teaching basketball in America, phlebotomist and Artist Liaison for a (really bad) Abba tribute band.

Her top selling stories include The Spy Who Loved School Dinners which won the Blue Peter Best Story Award and My Head Teacher is a Vampire Ratwhich won The Children’s Book Award. Two of her books, Petunia Perry and the Curse of the Ugly Pigeon and There’s a Werewolf in My Tent, were shortlisted for the Lollies – the Laugh Out Loud Awards.

Becka Moor studied Illustration at Glyndwr University in North Wales. She has since moved back to Manchester where she works under the strict supervision of Miss Daisy and Bella, her two cats. Affectionately called Ray-Ray and Cinderbella.