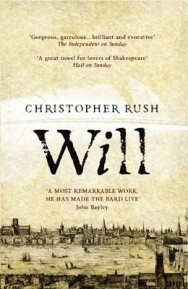 Home > Fiction from Scotland > Will

William Shakespeare is dying, with his lawyer at his bedside. It is time to dictate his will. But how can a man put his affairs in order before he’s come to terms with his past? Acclaimed poet, novelist, and Shakespeare professor Christopher Rush has put thirty years of scholarship and creativity into this unforgettable re-imagining of the Bard’s life. Rush takes readers into the mind of William Shakespeare, a man whose almost superhuman art was forged from very human frailties and misfortunes. Will takes us back to Shakespeare’s childhood, his first encounters with sex, and the dangers of politics, plague, and love. We hear the chilling account of the Tyburn executions, see him crossing the frozen Thames with the wooden beams that would become the Globe theater, and return with him to Stratford on the heartbreaking journey to bury his only son. Rush has created an utterly irresistible figure whose voice rings true across four hundred years–irrepressible, bawdy, witty, and wise, his every word steeped in the situations and phrases of his own plays.

Christopher Rush was born in St Monans and taught literature for thirty years a teacher of literature in Edinburgh. His books include A Twelvemonth and a Day and the highly acclaimed To Travel Hopefully. A Twelvemonth and a Day served as inspiration for the film Venus Peter, released in 1989. The story was also reworked by Rush in a simplified version in 1992 as a children’s picture book, Venus Peter Saves the Whale, illustrated by Mairi Hedderwick, which won the Friends of the Earth 1993 Earthworm Award for the book published that year that would most help children to enjoy and care for the Earth.