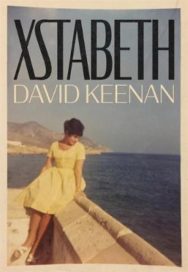 Pre-order XSTABETH in paperback, ebook or audio before 1 November to access the exclusive digital prequel, THE TOWERS THE FIELDS THE TRANSMITTERS. Full details: bit.ly/XstabethPreOrder’Reading [Xstabeth] feels like being cut open to the accompanying sound of ecstatic music’ Edna O’Brien’Prepare for more of that inimitable Keenan narrative voodoo brilliance’ Wendy ErskineIn St Petersburg, Russia, Aneliya is torn between the love of her father and her father’s best friend. Her father dreams of becoming a great musician but suffers with a naivete that means he will never be taken seriously. Her father’s best friend has a penchant for vodka, strip clubs and moral philosophy.When an angelic presence named Xstabeth enters their lives – a presence who simultaneously fulfils and disappears those she touches – Aneliya and her father’s world is transformed.Moving from Russia to St Andrews, Scotland, Xstabeth tackles the metaphysics of golf, the mindset of classic Russian novels and the power of art and music to re-wire reality. Charged with a consuming intensity and a torrential rhythm that pulses with music, it is an offering of transcendence and a love letter to the books of Chandler, Nabokov and Dostoevsky, by a writer who is rewriting the rulebook of contemporary fiction.

David Keenan was born in Glasgow and grew up in Airdrie, in the west of Scotland, in the late-70s and early-1980s. He is the author three novels, the cult classic This Is Memorial Device, which won the Collyer Bristow/London Magazine Award for Debut Fiction 2018 and was shortlisted for the Gordon Burn Prize, For The Good Times, which won the Gordon Burn Prize in 2019, and Xstabeth. He is also the author of England’s Hidden Reverse, a history of the UK’s post-punk/Industrial underground, as well as To Run Wild In It, an experimental novella, and the co-designer, alongside Sophy Hollington, of his own tarot pack, the Autonomic Tarot.