Arrivals and Sailings: The Making of George Wyllie

“It takes one absurdity to question another”

This extract highlights how George Wyllie’s bold artistry connected him to both Scotland and to the wider international arena. Through authors Wyllie and Patience we are given fascinating insight into the political and cultural context of his 1980s sculptures ‘A Robin in a Cage’ and ‘Berlin Burd’.

Extract from Arrivals and Sailings: The Making of George Wyllie
By Louise Wyllie & Jan Patience
Published by Polygon

A Way with the Birds

The liberation George felt at being able to pursue his art on a full-time basis led him to make connections and form firm friendships with many like-minded souls. He may have been in his sixties, but he had the energy of a man half his age. His gregarious nature helped, of course, not to mention his ability to get on with people of all ages from all sorts of backgrounds and cultures. In 1981, as well as his work with Beuys in Edinburgh, he exhibited with Dawson Murray at the Stirling Smith Museum and Art Gallery in a show called Counterbalance. For this thoughtful exhibition, George made sculpture in response to Dawson’s paintings and vice versa. Years later, in 1999, George and Dawson revisited this idea of responding to one another’s work with a monumental installation in Glasgow’s brand new Buchanan Galleries shopping centre. In this work, Divine Rythm, George suspended a 400kg stone on a stainless-steel beam in front of Dawson’s painting of the earth’s strata. It was underpinned by a quotation from Hugh MacDiarmid’s poem ‘On a Raised Beach’.

In 1981, George also had another solo exhibition at Strathclyde University’s Collins Gallery called A Way with the Birds, which travelled on to London’s Serpentine Gallery, where it was a major attraction during the summer months. This was George’s first big exhibition in London and it attracted press attention on an unparalleled scale, especially outside Scotland. This included an appearance on the BBC’s popular early evening current affairs programme Nationwide. He started to receive fan letters and he made sure he answered each and every one of them. The exhibition’s title was a nod to George’s continuing fascination with making birds from steel – or ‘burds’, as he referred to them, in the Scots vernacular. A Way with the Birds featured several portrayals of birds, including A Robin in a Cage, a simple yet poignant little steel robin – with painted red breast – trapped in a cage. 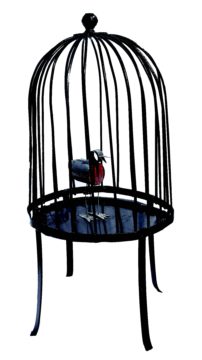 A Robin in a Cage by Wyllie

George and Daphne always used to wonder if his attraction to creating birds or featuring them in his work had something to do with Andy’s influence from beyond the grave. One of the most memorable feathered friends George made was his Berlin Burd. This gangly big bird was commissioned in 1988 by the City of Glasgow as part of the European Capital of Culture celebrations that year in Berlin. George sited it at the Berlin Wall at Reinickendorf where it peered over into what was then Communist East Berlin. He invited schoolchildren in West Berlin to participate by making their own birds for display alongside his own five-metre tall bird. Ironically, or perhaps prophetically, the wall came tumbling down just two months after George’s Burd was planted on its lofty vantage point. The Berlin Burd combined aneducational project with street theatre and art-with-a-message and George revelled in its surrealism. The planning powers-that-be in West Berlin were reluctant to allow him to install the Berlin Burd initially, but he reminded them that ‘ein Vogel ist kein Stein’ or ‘a bird is not a stone’ and that students would not be throwing it in demonstrations. He later wrote about the experience: ‘I think the bird looking over the wall in Berlin was quite good. I said to this German, “This wall’s a bit stupid really, because there’s Germans on this side, Germans on that side, and we’re all really together, except this wall’s keeping us apart. It’s an absurdity.” “You’re right,” he said. “It takes one absurdity to question another.”’ 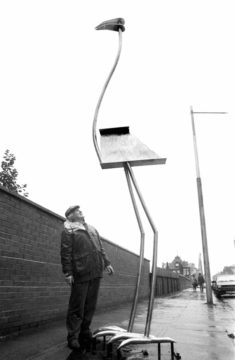 One of the biggest hits at George’s A Way with the Birds exhibition was the Heath Robinson-esque All British Slap and Tickle Machine, a kooky contraption with a recycled bicycle seat for people to sit on, operating pedals, a welter of floppy leather hands and a somewhat risqué tickling finger. George told the media this machine was designed to prevent the loss of ‘a sense of joy in things’ during the Thatcher years. George’s gift for making people laugh brought all sorts of visitors into galleries who had never visited one before. The Serpentine Gallery staff were amazed at the laughter ringing through the space during the exhibition’s run in London. George knew, from his lifelong fascination with performance, that humour was a way to permeate people’s hearts and minds.

Around this time, George met Barbara Grigor, a charismatic film and television producer as well as an art lover, who had set up an organisation called the Landmark Sculpture Trust, later the Scottish Sculpture Trust. At that point, together with her husband Murray, Barbara ran a film company called Viz. George didn’t meet Murray until a few years later, but all three would go on to enjoy a fruitful and life-enhancing friendship. Murray recalls his late wife (Barbara died in 1994 at the age of just fifty), coming home from George’s first solo show at the Collins Gallery in 1976 ‘completely bowled over by his work and his wry wit’. According to Murray, ‘They really got on so well because Barbara shared George’s attitude to the mandarins of Scottish art who seemed always to be obsessed with reshowing London exhibitions in Scotland. “Pioneering Old Hat,” as Barbara called it. She invited George onto the board of the Scottish Sculpture Trust, which greatly livened up meetings.’

George also got to know jazz musician, art critic and fellow lover of Surrealism George Melly. The two men shared many interests and met up whenever they could. In September 1982, Melly sent George a letter headed ‘Dear George the Pataphysician’, which alluded to their shared passion for the work of surrealist French writer and philosopher Alfred Jarry. Jarry was the man responsible for coining the term ‘pataphysics’, meaning ‘the science of imaginary solutions’. Referring to having just read George’s A Day Down a Goldmine script, Melly writes: ‘You’re right about usury of course. You can’t eat it, make love to it or take it with you and yet it runs, very badly, the world. All it’s good for is to spend & I’m very proficient at that, hence the squirrels’ wheel.’

Arrivals and Sailings: The Making of George Wyllie is out now published by Polygon (£25, hardback)