I was in my twenties with a small baby on my hip, dreaming of all the things I could have been. Then I read this. It transported me – the everydayness of the stories and their sudden shifts into freedom and love.

The Trick is to Keep Breathing by Janice Galloway

A brilliant (and original) dissection of grief and mental breakdown that demonstrates how subject matter can also mirror form.

OK, anything by Kate Atkinson really but I love this series following former police detective Jackson Brodie as he navigates the only accounting sheet that matters: ‘Lost on the left, Found on the right’.

The Pirates in the Deep Green Sea by Eric Linklater

Read to me as a child while holidaying in the West of Scotland, this is the perfect underwater adventure. Set in and around a fictional Scottish Isle.

The Adoption Papers by Jackie Kay

Our new Makar’s first collection. Three voices, separate and entwined, tell the story of what it means to have more than one mother. 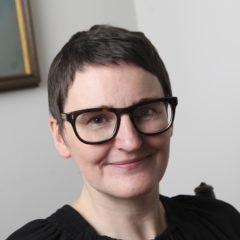 And the Land Lay Still by James Robertson

The sweep of life and politics in twentieth century Scotland. It includes a scene in Brownsbank Cottage, last home of our great cantankerous poet of nationalism, Hugh MacDiarmid. I came upon that passage while on a writers retreat at Brownsbank Cottage (first writer-in-residence, James Robertson…) Scotland’s literary history flowed through my veins.

The Vanishing Act of Esme Lennox by Maggie O’Farrell

I’m always eager to read Edinburgh writers who also write about Edinburgh, as I do, and this elegant story of a lost life recovered that slides between the city of the ‘30s and the present day is a lyrical gem.

Report for Murder by Val McDermid

I enjoy Tartan Noir (Rankin, Mina, Welsh et al), but my entry point to crime was this delight. Journalist Lindsay Gordon investigates murder most foul in a girls’ boarding school. Only discovered much later that McDermid was an obsessive reader of my own childhood favourite, those Chalet School girls.

The Missing by Andrew O’Hagan

My Brilliant Career by Miles Franklin

This irrepressible coming of age tale was a passion of my youth. Written in the 1890s when the author, Stella Franklin was only 16, it is quintessentially Australian. But her (often drunk) tutor on the cattle station where she grew up was a Scot who introduced her to literature; and it was first published by Blackwoods in Edinburgh. She also went on to serve in Elsie Inglis’ Scottish Women’s Hospitals during WW1 so I think it counts. An amazing independent spirit.

The Other Mrs Walker by Mary Paulson-Ellis is out now, published by Mantle/Pan Macmillan.