Cleghorn was one of the many remarkable Scottish surgeons who worked for the East India Company. Using his official posting as a base for research upon India’s rich flora, his particular interest in useful plants led to the major work in the field of forest conservancy for which he is best remembered.

“Henry Noltie wonderfully captures a world in which both plants and improved knowledge about them were, at once, objects of scientific study and political economy and the subject of spiritual reverence and cultural authority” – Professor Charles Withers, Foreword, Indian Forester, Scottish Laird.

Hugh Francis Clarke Cleghorn (1820–1895) was one of the many remarkable Scottish surgeons who worked for the East India Company. What was perhaps more unusual was that he used his official posting as a base for research upon India’s rich flora including making efforts to record it visually by commissioning drawings by Indian artists.

Hugh Cleghorn was born in Madras on the 9 August 1820, the eldest son of Peter Cleghorn (1783-1863) and Isabella Allan (1796-1824). Brought up on Wakefield (later renamed Stravithie), the family estate in Fife, Hugh and his younger brother Allan were sent to Edinburgh to attend the city’s High School, followed by a spell at the new Madras College in St Andrews. This was followed by undergraduate studies at the University of St Andrews and then, in October 1837, Hugh matriculated in the Medical Faculty at the University of Edinburgh. In the following year, Cleghorn’s formal botanical studies began when he took Professor Robert Graham’s class at the Botanic Garden in Inverleith Row, a standard element of medical studies at that time. Having graduated in 1841, Cleghorn was soon preparing for entry into the East India Company’s medical service and on the 15 August 1842, aged 22, he set sail from Spithead on the Wellington, arriving in Madras on 6 December. 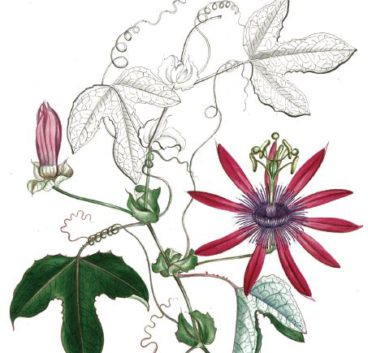 Cleghorn’s particular botanical interest was in useful plants, which led to the major work in the field of forest conservancy for which he is best remembered. In 1851 he read a pioneering report on tropical deforestation to the British Association for the Advancement of Science; in 1856 he was appointed the Madras Presidency’s first Conservator of Forests; and in the 1860s, with Dietrich Brandis, Cleghorn played a major role in setting up a structure for forest management in British India that, while providing timber for burgeoning commercial demand (especially railways), allowed an element of forest preservation for the protection of watersheds and climatic amelioration.

After Cleghorn’s death his outstanding collection of drawings, and books relating to forestry and botany, was divided between the University of Edinburgh and what became National Museums Scotland. The latter share was transferred to the Royal Botanic Garden Edinburgh (RBGE) in 1940, whereupon it was reunited with his substantial Indian herbarium that had come to the Garden in 1896. At this point Cleghorn became, if posthumously, one of the most significant benefactors in the Garden’s 300-year history – books dating back to 1582, and around 3,000 exquisite botanical drawings. Neither Cleghorn’s significance for RBGE, nor the breadth of his interests and achievements, has ever been fully appreciated and in order to do this, two books have been necessary.

A biography explores Cleghorn’s life and work, placing it in the latter days of the Scottish Enlightenment (in the first phase of which his eponymous grandfather was a leading figure), both in the field of applied and useful knowledge, and the documentation of natural resources in both words and pictures. In the second volume more than 200 of the drawings from the Cleghorn Collection are reproduced, in colour, for the first time. These include drawings from nature, copies based on European prints, and Nature Prints made from herbarium specimens. They are the work of several South Indian artists and of pupils of the pioneering Madras School of Art.

Indian Forester, Scottish Laird: the Botanical Lives of Hugh Cleghorn of Stravithie (HB, £15) and The Cleghorn Collection: South Indian Botanical Drawings, 1845 to 1860 (HB, £20) are out now published by the Royal Botanic Garden Edinburgh.