Born in 1900 Roland Penrose pursued a career as an artist before becoming friends with a number of Surrealists. Hartley introduces Penrose’s colourful life and work while highlighting how a number of major works from Penrose’s private collection ended up in British public collections.

Extract from  ‘Roland Penrose: Private Passions for the Public Good’
Published in Surreal Encounters: Collecting the Marvellous
By Keith Hartley
Published by National Galleries of Scotland

Roland Penrose (1900–84) began pursuing a career as an artist, before meeting and becoming friends with a number of Surrealists. When he inherited money from his parents in the early 1930s, he began to help the artists he knew, buying works and financing their projects, which was the start of a broad and extraordinarily high-quality collection of surrealist art – one of the four collections that are brought together in this book.

Penrose’s talents lay in bringing people together (not an easy thing to do), holding them together (an even more difficult thing to do, especially with people as disputatious as the Surrealists) and making sure that they brought things to a conclusion. Penrose was a born diplomat and conciliator, always seeking common ground and avoiding unnecessary quarrels. But beneath the affable, old-world manners and charm was a resolve to achieve well-defined goals. Breton famously said that Penrose was ‘surréaliste dans l’amitié’, surrealist in friendship.[1] This was no empty phrase, no attempt to provide Penrose with an easy epithet, to go with the supposedly more meaningful epithets that he applied to the other Surrealists. Breton, and almost everyone else who came into contact with Penrose, recognised that his gift for friendship was quite remarkable and produced extraordinarily positive results. In a movement such as Surrealism which tried to bridge the gap between individual creativity and group solidarity and all too frequently failed, anyone such as Penrose who united people was very welcome indeed.

Up until 1935 when he was ‘by chance’ introduced to the young English poet, David Gascoyne, in Paris, Penrose was, by and large, living the life of a well-to-do expatriate English painter in France. He had acquired a post-cubist style in the usual Bloomsbury way via André Lhote’s Académie in Paris and an extended period in the south of France. But in 1926 he had come under the spell of Max Ernst and he then made a large number of highly accomplished frottages in the manner of Ernst’s Histoire Naturelle published the same year. He used similar techniques in some of his paintings, but he had not yet found a style or mode of expression that was fully his own.

[…] In Scrap Book Penrose says that he was not by temperament a collector in the classical mould: ‘It was probably a reaction against the stately well-ordered collections at Wisbech [his maternal grandfather’s house] that gave me a dislike from an early age for the classical idea of collecting. A collection shared too many characteristics with the cemetery.’[2] However, he did admit that when he had lived in Paris he collected strange objects that attracted his attention, and that he had helped out his friends such as Max Ernst who were hard hit by the Depression. He seems to suggest that this was one of the reasons behind his first major purchase of a work of art: Ernst’s La Joie de vivre, 1936. He bought this work in 1935 even before Ernst had finished it.[3] However, there is no doubt that Penrose also felt it hard to resist buying works that really appealed to him. An important case in point was his acquisition in March 1936 of Picasso’s Femme nue couchée au soleil sur la plage, 1932. Penrose had seen this illustrated in a publication and was immediately smitten. He writes about it in Scrap Book: ‘At that time, I had seen reproduced in the Cahiers d’Art a recent painting by Picasso dated 1932 which seemed to contain magic of a kind I had never known before and to fill me with a longing to see and if possible own the original.’[4] Picasso took Penrose down to his house in the country at Le Boisgeloup and, even though Penrose was surprised to see how small the painting was – from the reproduction he had expected to see something much more monumental – he purchased it, the first Picasso he acquired.

It is wrong to see Penrose’s collection as being primarily the product of bulk purchases, as some have suggested.[5] Since coming into his inheritance, Penrose bought consistently, from his friends mainly (both artists and otherwise) but also from shows of contemporary art. In Scrap Book he is reluctant to see himself as a collector, calling his collection, self-deprecatingly, ‘a collection which collected itself’.[6]

[…] Penrose’s friendship with Picasso, although at times severely tested when Picasso kept him waiting before he would see him, led to other successes.[7] In January 1965 Picasso finally agreed to sell his masterpiece The Three Dancers, 1925, to the Tate. This came at the end of a long process, begun in 1960, of tentative probing, tactful questioning, persistence, cajoling, diplomatic silences, and well-aimed praises (not to say flattery) on Penrose’s part. To persuade Picasso to part with this painting was a triumph. Picasso regarded it very highly and commented on the fact that ‘some people had told him they preferred it to Les Demoiselles [d’Avignon, 1907, Museum of Modern Art, New York] – in fact it is more complete in composition and conception.’[8] Picasso said that it was really unlike anything else in his oeuvre. He certainly preferred it to Guernica (‘de beaucoup’) and had repeatedly refused to sell it.[9] It was, Picasso said, because of Penrose that he finally agreed to sell it to the Tate.[10]

[…] To all these exhibitions and to hundreds of others at home and abroad Penrose lent very generously from his collection.[11] As long as the shows were serious and well-organised, he believed that the works he owned should be seen as widely as possible. Although he enjoyed being surrounded by works of art that he loved, he was in no way selfish about them. Indeed, when it came to selling them (in order to buy a house and farm in the country or to help the ICICA) it was a deliberate, if reluctant, choice.

A fair number of major works from Penrose’s collection have ended up in British public collections. Between the two national collections in London and Edinburgh, Britain now possesses one of the finest groups of surrealist masterpieces in the world. This is due to a great extent to Penrose and to his enthusiastic championing of that movement in the 1930s and beyond. Today Surrealism is enjoying unprecedented critical attention and popular success. In part, this can be attributed to pioneering shows such as Dada and Surrealism Reviewed, which was shown at the Hayward Gallery, London in 1978.[12] Penrose was one of the advisers for this exhibition and was closely involved in the hanging. But, perhaps, more important is the way that the surrealist technique of collaging together objects that our rational mind separates but which our imagination finds an intoxicating synthesis, has now become an accepted part of contemporary artistic practice.

[3] Penrose had helped Ernst, a close friend since 1927, in many ways. He had backed the publication in 1934 of Ernst’s collage novel Une Semaine de bonté, had allowed Ernst and his wife Marie-Berthe to stay at his château, Le Pouy, in Gascony in 1935 when they were in dire financial straits, and in 1937 he had funded the publication of a special edition of Cahiers d’Art devoted to Ernst’s work. Ernst had acknowledged this debt to Penrose with a dedication to him in the 1937 book: ‘Je dédie ce livre à Roland Penrose à la nymphe écho et aux antipodes du paysage.’ Penrose had bought several other works by Ernst in the period 1936–7. The special edition of Cahiers d’Art lists a version of Jardin gobe-avions, 1935, and Le Déjeuner sur l’herbe, 1935–6 (private collection).

[5] Most notably the collector and art historian, Douglas Cooper, one of the few people Penrose actively disliked. John Richardson in his book The Sorcerer’s Apprentice: Picasso, Provence and Douglas Cooper, writes: ‘The two Englishmen were very competitive about each other’s collections. Douglas dismissed Roland’s as “ready-made”. “I don’t call it collecting,” he used to say, “if you combine Picasso’s handouts to his surrealist friends with a collection bought lock, stock and barrel from a Belgian.”’ John Richardson, The Sorcerer’s Apprentice: Picasso, Provence and Douglas Cooper, 1999, p.26.

[7] Picasso liked to play his friends and admirers off against each other. In the case of Penrose, he usually did so against Douglas Cooper, his arch-rival. John Richardson describes what frequently happened: ‘A past master at dividing and ruling, Picasso enjoyed playing these two admirers off against each other and putting their devotion to the test. He would keep Roland, who had come specially from England, waiting for days at a time in Cannes, saying that he was busy with Douglas. Next time, Douglas would be reduced to begging Jacqueline to arrange an audience with the master.’ John Richardson, The Sorcerer’s Apprentice: Picasso, Provence and Douglas Cooper, 1999, p.234.

[9] Roland Penrose, Picasso notebook, 29–31 January 1965. He wrote: ‘On m’a demandé cent fois le vendre – des Americains, Kahnweiler et bien d’autres mais j’ai toujours refusé.’ [I have been asked hundreds of times to sell it – Americans, Kahnweiler and lots of others but I have always refused.] (RPA).

[10] Penrose quotes Picasso in one of his Picasso notebooks (31 January 1965) as saying: ‘Enfin si je le [The Three Dancers] vends aux anglais c’est à cause de toi – et s’ils désirent l’avoir, c’est toi qui l’a fait.’ [In the end if I’m selling it to the English, it’s because of you – and if they want to have it, it’s you that did it.] Modest and tactful to the last, Penrose added: ‘Non, ça c’est impossible, c’est toi qui l’a fait.’ [No, that’s impossible, it was you who made it.] (RPA).

[11] In Scrap Book Penrose wrote: ‘I always had the feeling that works that had collected around me still belonged in some degree to their authors and whenever asked to lend to serious exhibitions I do so … ’ Roland Penrose, Scrap Book: 1900–1981, London, 1981, p.173.

We’re delighted to show you some spreads from Surreal Encounters below: 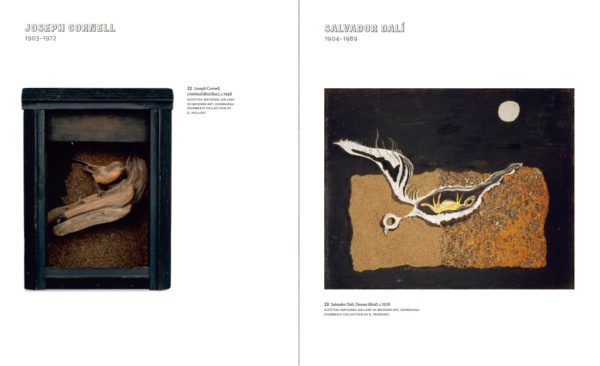 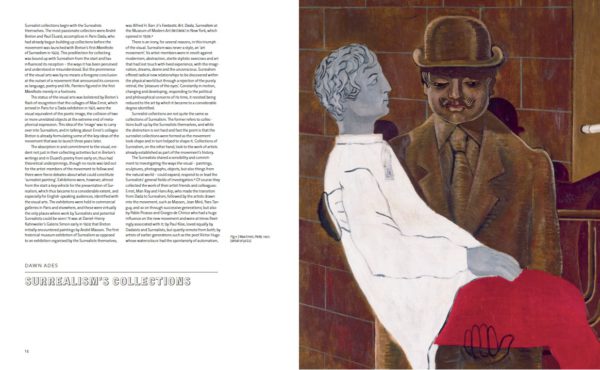 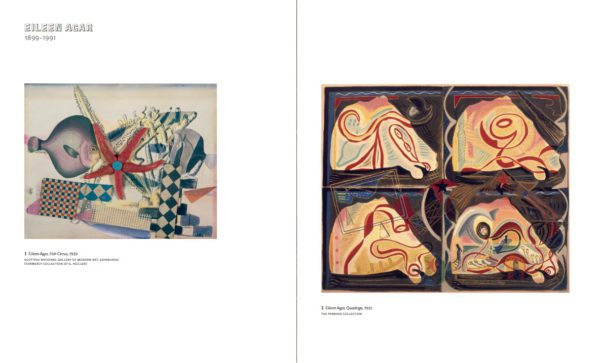 Surreal Encounters: Collecting the Marvellous, containing this extracted piece on Penrose, is out now (PB, £19.95) published by the National Galleries of Scotland.

If The Corncrake Calls

‘The last combing of the day goes from the sky and the bird is silent. The owl calls’

The Making of Mickey Bell

‘Whit am I gaunny dae like? Trail round the charity shops for tae get some crap tae resell on eBay, …