‘What kind of reading would the Spectacles of Knowledge give for Thomas’s own book?’

David Robinson delves into the fantastical world of Young Adult fiction by casting an eye over Dragon’s Green, the hotly anticipated first Young Adult novel by acclaimed author Scarlett Thomas. With narrative action centered around the Tusitala School for the Gifted, Troubled and Strange and the mysterious Otherworld, David finds Dragon’s Green to be magical and metafictional but – above all – an energetic and imaginative celebration of books and reading.

“The most exciting debut in children’s fiction since Harry Potter.” No, I’m not going to count the number of children’s writers who have been saddled with such weighty hype. It wouldn’t be fair. There are too many of them, and the publicity bubble always bursts at the bookshop till.

But that’s precisely the quote on the back of Scarlett Thomas’s Dragon’s Green, published this week by Canongate. So why am I writing about it? Have I learnt nothing about the yawning emptiness of hype?

I’ll begin with the name of the person making the claim: Joanne Harris. And that carries some weight with me. Firstly, because she’s nothing to do with Canongate. Secondly, because Harris, who once spent 22 hours recording Harry Potter and the Goblet of Fire on audiotape as a Christmas present for her daughter, knows the full extent of Rowling’s grip on the young teen mind. And finally, because she’s no slouch at fantasy herself.

Most people know Scarlett Thomas as the geek chic or ultra-metafictional author of books such as PopCo and The End of Mr Y, just as they’ll know Harris as the author of Chocolat. But just as Thomas is now flexing her muscles as a Young Adult writer with Dragon’s Green, Harris did the same thing back in 2007 with her novel Runemarks, the first of a trilogy, and which is out in paperback this month from Gollancz.

The final parallel between the two writers is that, when they switched to YA fantasy fiction, they both drew extensively on their own obsessions. With Harris, it was Norse mythology. She has been writing stories about the Norse gods since she was nine and a friend of her parents gave her a present of a 1919 copy of HA Guerber’s lavishly illustrated Myths of the Norsemen. The interest has been lifelong: these days, she is even learning Old Norse. (Incidentally, the hold of the  Norse gods on our imagination hasn’t waned either; the first of the eight-part TV adaptation of Neil Gaiman’s 2001 novel American Gods – in which the old Norse gods tackle their 21st century rivals such as wealth and the media – is screened by Starz in the US at the end of this month). 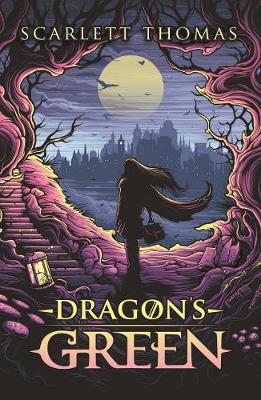 With Thomas, the key obsession is with storytelling. Dragon’s Green is drenched in it. Books are the key to all of its adventures. Through books, characters can – literally – get lost, just as they could in The End of Mr Y. Through books, as those agencies promoting reading always promise, you really can travel in your head to other places, only this time your body will go with you. One of the Thomas’s neatest ideas is that the last-ever reader of a book can gain immense power from doing so. Why? It’s pure Derrida:

“You know when you read a book that’s set in a big house and you get a description of the house, but your imagination makes up its own description anyway? And if you think about it, the house you picture is actually somewhere you visited when you were five, or your neighbours’ place or something like that? Books are used to having their meanings shaped in these ways by readers. […] If ten thousand people all read a book and love it, and add their descriptions, locations and feelings and so on, a book absorbs all that energy and becomes extremely powerful. The Last Reader of that book will have a particularly strong experience of it and at the end he or she will absorb all of that power […]”

The last copy of Dragon’s Green is one such book full of latent energy from all its past readers. If Effie Truelove, a pupil at the Tusitala [geddit?] School for the Gifted, Troubled and Strange, can summon up its powers, it will be able to take her to the Otherworld, the world of true magic, and – who knows? – meet her mother there. Or maybe her beloved grandfather. Or maybe neither. I’m not telling.

It helps that Thomas has uninvented the internet (there’s a dark net equivalent for scholars of magic, but effectively we’re back to books as a source of all knowledge). There are some computer arcade games too, but they’re hardly enticing: people play them “until their life force runs out”. But essentially this storyland is a bibliophile’s paradise, and if you’re lucky enough to wear the Spectacles of Knowledge – I imagine they must be something a bit like Google Glass – you can wander around a library and tell, by green-and-gold bars emanating from each book which of them has the most magical power. And libraries matter – especially one, as here, that is full of magic books. Indeed, the whole plot is essentially about the recovery of a library, which is a new one on me.

What kind of reading would the Spectacles of Knowledge give for Thomas’s own book? Quite a high one, I reckon. Right from the start, with its description of a particularly scary teacher, Mrs Beathag Hide, there’s a subversive unpredictability about her writing. After emphasising the teacher’s scariness (“the kind of teacher who gives children nightmares”, “face as pale as a cold moon”) we are told “Her perfume smelled of the kind of flowers that you never see in normal life, flowers that are very, very dark blue and only grow on the peaks of remote mountains, perhaps in the same bleak wilderness as the tree whose twigs her fingers so resembled.”

Already, you get a flavour of Thomas’s style. It’s never obvious. And even suppose we DID think of what perfume such a character would wear, we probably wouldn’t imagine such further extensive qualifications about its source. No, we would stick at the most basic levels of description. Instead of which:

“Just her voice was enough to make some of the more fragile children cry” – again, most descriptions of incidental characters in children’s books would end there, but Thomas’s rolls on baroquely – “sometimes only from thinking about it, late at night or alone on a creaky school bus in the rain”.  By the time you’ve reached “in the rain” – the fourth qualifier in the sentence – you realise that, even though you’re only on Page 2, you’re going to enjoy Dragon’s Green. To parents of a certain vintage, it’s akin to that moment when you sat down to watch Toy Story with your kids and realised that there are going to be laughs there for grown-ups too.

But that not enough to answer whether Dragon’s Green is going to live up to the Harry Potter hype. For that, you’ve got to reach back into your own mind when you were a teenager and remember what you most needed from a book. This is where it’s important to mention that in Dragon’s Green, Effie Truelove isn’t acting alone, but has two boys and two girls in her class to help her. Whether or not Thomas’s readers believe in their friendship is probably what will determine the success of her book. Why? Because that’s the main reason Harry Potter worked for JK Rowling. “If you put all the Quidditch and magic aside,” Charlie Fletcher, the Inveresk-based screenwriter and author of The Oversight fantasy trilogy told me, “the Harry Potter books were essentially very traditional and about friendship and loyalty and forming your own family beyond the one you’re born into. That’s the key for teens, because you’re leaving your own family behind and making an alternate family with your friends.”

Children’s book expert and literary agent Lindsey Fraser agrees: “Those three central characters in Harry Potter – their friendship is what children instantly recognise; that’s what the big hook is. I used to think that love in its widest sense was the driving force in all children’s fiction, but now I think it’s all about trust. From trust flows confidence and bravery, so you can take risks and sometimes be reckless and stupid and not always do the right thing, but you won’t be blamed for it. So you can go outside your comfort zone – and that’s what children’s books are all about.”

As Dragon’s Green is only the first volume in Thomas’s Worldquake series, I don’t yet know to what extent it will live up to all that. But she is, I think, off to a hugely promising start.

David Robinson is a freelance journalist and editor and from 2000-2015 he was books editor of The Scotsman.

Dragon’s Green, book one in the Worldquake series, by Scarlett Thomas is out now published by Canongate priced £12.99.