Children’s author Emily Dodd is continually awed by the Cairngorms and her many encounters with nature, after years of visiting the region, have shaped her much-loved stories. So settle down with a cup of tea and a slice of cake (another of Emily’s favourite finds as you’ll see!) and read on to discover how the wildlife of the Cairngorms brought Cameron, the Capercaillie that can’t dance, and other fun characters into existence.

I’m not long back from the Cairngorms, one of my favourite places in Scotland. I go there every year and it helps me to write. I don’t write while I’m there; I walk and explore and see wildlife and eat cake. The inspiration is a by-product of the place; it soaks in and pops out as a story a year or so later. Well, that’s how it’s happened so far. 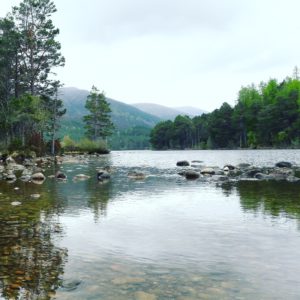 Loch an Eilein in the Cairngorms

Take my first book for example. I went to the RSPB caperwatch at Loch Garten to try to see a dancing capercallie every year. A capercaillie is a rare Scottish bird about the size of a turkey. It’s famous for dancing and makes a noise like a champagne cork popping. There’s only about 1000 left in the wild. 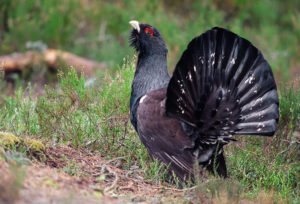 It took four years of anticipation and trying to see the real thing before I could write a story about a capercaillie called Cameron who can’t dance. He learns to dance on a walk with a red squirrel. It’s a bit like karate kid, but feathered. That’s what I love about nature – the stories are already there. 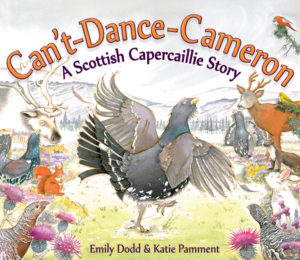 My latest book set in the Cairngorms is Ollie and the Otter, which tells the story of an otter called Rory and an osprey called Ollie. Ollie is trying to make friends with Isla, another osprey. In real life a male ospreys catches a fish and throws it mid air to a female. The female turns upside-down to catch the fish. It’s pretty amazing. After that escapade they mate. There’s no mating in this book though – it’s aimed at 3-6 year olds! 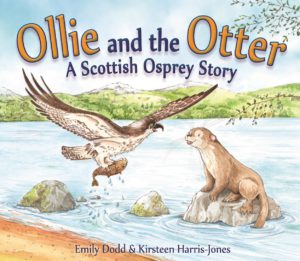 Like Can’t Dance Cameron, the story of Ollie, Isla and Rory was inspired by watching real ospreys at RSPB Loch Garten nature reserve. 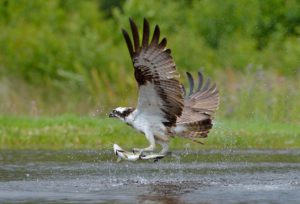 I don’t want to write boy-meets-girl happy ever after stories for four year olds because a) they’re not realistic and b) they’re not relevant. But wanting to make friends with someone you think is way cooler than you is something children can totally relate to. That’s important too. When you’re writing a book, there needs to be a character that the reader can relate to.

I usually add learning theory to my books too. I love learning. This book is based on Sir Ken Robinson’s theory ‘The Element’. If you’ve not heard of him you should check out his TED based around this theory – it’s the most watched TED talk of all time!

Sir Ken Robinson says the education system is flawed: schools make you do more of the thing you’re not good at – if you’re bad at spelling you have to do more spelling. But, Ken has proved if you can do more of the things you’re naturally good at, be it dancing or football or art, then your confidence goes up and attainment goes up in all areas. So, you can get better at spelling by playing more football, if football is your thing.

Back to the story… Ollie is rubbish at throwing and he’s advised to practice more. He feels worse and gets worse until his otter friend says this:

“Why don’t you stop practicing and do things you love instead? When I do things I love I feel better, and then I get better at everything. Even the hard things.”

My stories come from a combination of inspiration from nature and things I’m learning. The Grouse and the Mouse is about how to maintain your unique identity in the face of controlling people – something I’ve struggled with. It’s about narcissism but it’s also about camouflage and teamwork. If you see a black grouse strutting his stuff you’ll understand why Bagpipe the black grouse is a proud show off. But he crashes into a deer fence and falls in a pile of McMoo Poo and Squeaker the wood mouse saves the day – so it’s all okay in the end! 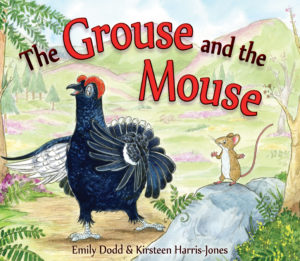 Last month, I shared these stories with families at the Cairngorms Nature Big Weekend. I spent a morning walking through the 7000-year-old Abernethy forest with RSPB Community Ranger Alison Greggans. She explained the pine trees stand alive for 300 years and then spend another 300 years standing dead, still giving life to the forest. Even when the trees fall they continue to give life. It reminds me of books! 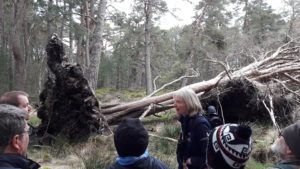 There’s always something new to discover in the Cairngorms. This year I found a new café – The Potting Shed – with the best cake I’ve ever had (Lindt chocolate and raspberry) and red squirrels outside the window. I like to sketch on my ipad and I love to just watch. I’d love to illustrate my books one day, maybe that will pop out too – like the stories that come from the wildlife of the Cairngorms.

Emily Dodd is science communicator and writer of fiction and nonfiction science books. She is also a screenwriter for CBeebies. Follow Emily on twitter, like her Facebook Author page, or read her blog. See her latest events here.

Emily is the author of Ollie And The Otter: A Scottish Osprey Story, The Grouse And The Mouse, and Can’t Dance Cameron all published by Floris Books priced £6.99 and £5.99.

‘There, on the opposite side of the track, was the tiger from which we had just had the fortunate es …