‘The end of a book creates the feeling that the reader takes away, the last memory and enduring sense of the story.’

In this exclusive article bestselling children’s author Lari Don muses upon endings – both in her writing and in the changing seasons – as the final instalment of her exciting Spellchasers trilogy is published. And, like the changing seasons which lead onto renewal and growth, she finds that endings should be embraced as they are an essential, and indeed joyful, part of the creative process.

A Season of Endings
By Lari Don

Autumn is about endings. About leaves falling and all the growth of spring and summer fading away.

I’ve been thinking a lot about endings recently, because the third book in my Spellchasers trilogy (The Witch’s Guide to Magical Combat) has just been published.

From a practical point of view, if the ending isn’t satisfying, the reader won’t want to read your next book, or recommend this one to anyone else!

From a creative point of view, if the ending doesn’t answer the question asked at the start of the story, what was the point of everyone – writer, characters and reader – going on the journey? 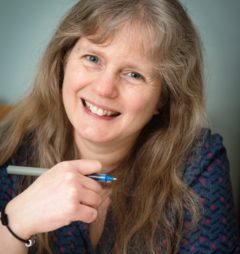 As I worked on the third Spellchasers book, I was conscious of trying to ensure that this novel’s purpose wasn’t just to tie up previous plot lines. I did resolve those storylines, but I also introduced a new character (who’d been in the other books, but hiding in the background), new magical powers and dangers, and a new baddie (who’d also been in the story before, hiding in the foreground…)

I wanted Witch’s Guide to feel like a continuation of the Spellchasers story, but in a new and surprising way.

I aimed to write a story with its own shape and flavour, but also bring the wider story of the whole trilogy to an end.

And because I write adventures for kids, I didn’t want all my effort and structuring and resolving to feel heavy or overthought or obvious to the reader. So I threw in a few chases and fight scenes, and a bit of shapeshifting…

I had fun writing a third adventure with a team of characters I love. But I knew I had to finish it. I had write a last battle. A last problem. A last chapter. A last page. A last line.

The trilogy turned out to be about a choice, about how my main character – who began the trilogy cursed to turn into a hare, but found the ability to control her shapeshifting – would decide to use the magic she’d discovered.

I thought I knew, right from the first page of the first book, what she would choose, how her magical journey would end. But in the final quarter of last book, I realised Molly’s attitude to magic was becoming very different to my attitude, and she was moving towards a different decision. I was happy about that, because the resolution of a story has to fit the character. (Especially if you’ve spent three years and three books bringing that character to life!)

But when we leapt into the last battle and neared that final decision, Molly and I together found another option entirely, one which hadn’t occurred to me earlier. Her decision surprised me, so I hope it will surprise the reader as well…

So I’ve reached the end of my time with this trilogy and these characters.  I’ll read from the books at festivals and in schools, and answer readers’ questions about their favourite characters. But I’ll never write about them again. I won’t send them on quests, or put obstacles in their path, or wonder what surprising decisions they will make when I confront them with danger. I’ve reached the end of my journey with the Spellchasers team.

And that goodbye is a very autumn sort of a feeling…

But, just like autumn and winter lead to spring and summer, and new life stirs under fallen leaves, I hope the beginning of the next story is starting to grow slowly and tentatively in my head.

Because the end of a story is important, of course it is, but perhaps the start of the next story is even more exciting?

Lari Don’s new book The Witch’s Guide to Magical Combat has just been published by Floris Books. Find out more about the Spellchasers trilogy, visit Lari’s website or find Lari on Twitter. 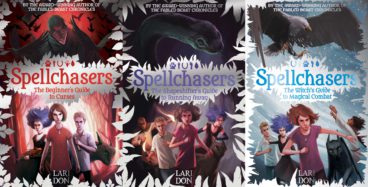 You can read many more articles by Lari on Books from Scotland – have a look here.

‘Concerned by the lurid press accounts of the time, I resolved to investigate the entire history of …