‘Flashes of fire, the frantic pace of a young runaway, flashes of landscape and of the world of travelling entertainers.’

Book trailers are an increasingly popular way to reach readers. Ahead of publication of her new novel for children, Highlands-based author Barbara Henderson takes us behind-the-scenes of the making of the Punch trailer, to describe how it all came together from concept through to execution, despite a few obstacles along the way…

Making the Punch Book Trailer (Is that the way to do it?)
By Barbara Henderson

My new children’s novel Punch was going to be out in the big wide world in the autumn, and my thoughts were turning to the book trailer. After all, the Fir for Luck book trailer had over 800 views, and provided such an easy and visual intro to the book for school visits and events. It also definitely generated interest in Fir for Luck ahead of its publication in 2016.

I got busy typing draft screenplays. But I found it surprisingly hard – after all, the book begins with a gigantic fire which completely destroyed part of the old town in Inverness. Kind of hard to recreate on the budged I was working with. Not to mention the pretty crucial role played by a dancing bear – again, footage was going to be hard to come by. 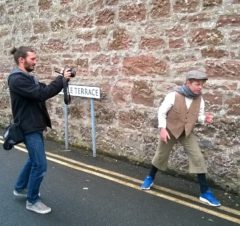 After a few drafts, I thought I had it: a one-minute trailer which would give a flavour of the story, without giving everything away. Flashes of fire, the frantic pace of a young runaway, flashes of landscape and of the world of travelling entertainers. Yes, this could really work. I arranged for family friend and filmmaker Ross Wiseman to visit for the day, primed ‘the talent’ (my 12-year-old son), gathered props and costumes –  and kept my fingers crossed for the forecast!

Along with eight hours of solid rain.

I picked up film guru Ross in the morning, and hopefully we headed off north to Strathpeffer – not only a lovely Victorian-looking place, but crucially, with a drier forecast. The buildings were grand, right enough, but not close enough together to create the impression of 1889 Inverness. On top of that, my previously willing talent had become a little self-conscious about walking and running around in the Victorian gear we’d borrowed from the theatre. We did many u-turns, reversed our way out of corners, drove along this street and that, before finally admitting the game was a bogey. Back to Inverness we went without a single shot in the can.

To our dismay, it still rained enthusiastically in my home town (and the setting of the book’s opening chapters). Time for a reboot.

Amazing what a bowl of soup can do for the dejected spirit – by the time we left for the museum at 2pm, the whole thing seemed tight, but almost possible again. We arrived early. The talent got changed and emerged a little reluctantly into the tourist-path between Inverness Castle and the town – it didn’t help that a group of passing Italians stopped to take pictures of him as soon as he appeared. Twenty minutes of scrambling up castle hill through long yielded our first usable footage. Ross the cameraman was beginning to smile. 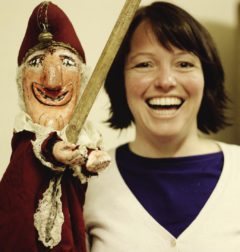 Into the museum for our appointment with the Victorian Punch and Judy puppets it was.

Handling and filming the very puppets with which the Morrison family had entertained Highland audiences from Victorian times, now that’s a privilege you don’t get every day. I had a fan-girl moment. I apologise for the completely unhinged grin in the picture. I have no excuse, I was carried away by the moment.

Next was a trip to my house which wasn’t far away: We needed my main character to witness the huge fire from the top of a tree.

We tried to film this in our tiny bathroom, the only room which we could black out completely, with me holding the laptop screen above the talent’s head so the flames would dance on his face, and daughter 2 waving a branch of fir tree beside, as if moving with a breeze. After all that effort, Ross scrutinised the screen: ‘No – too dark.’ We tried again outside and in the kitchen. It would have to do. On to daughter 2’s dancing feet, and some lovely landscape shots of Loch Ness. 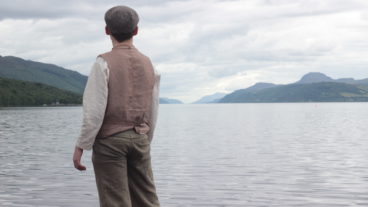 The rain had cleared up by then, leaving behind a moody layer of cloud and mist. Some fiddle-scraping in a flowery field might give the summery impression we were after. As evening fell and the town emptied, the talent became a little more relaxed, and we were able to get some running shots in the old town, up and down the tiny patch of cobbles we had found in a lane.

With the husband home from work and our stomachs full of pizzas, we headed for our final stop. What are the chances – the beautiful staircase in Eden Court’s Bishop Palace, normally accessible round the clock, was being used for a wedding! Noooo! I needed a nice old stair for my murder victim!

And no, we could not return the next day! We had today, and only today, before Ross-with-the-camera was off to Glasgow again!

The husband, reluctantly supportive, seemed relieved. ‘Oh well,’ he sighed, grinning out his relief and steering towards home.

‘No wait! One more try!’ I had heard of the beautiful staircase in the Royal Highland Hotel. ‘You’ll never get permission at this short notice,’ the husband argued, but he must have felt confident he was right – he pulled in by the station and I tried my charm offensive with the receptionist. I needn’t have worried. No problem at all, apparently. Film away!

My husband’s grin quickly turned to a grimace when I told him that yes, I expected him to lie down, upside down, on a staircase in a tourist-crowded hotel lobby on a Friday night, and play dead. I still can’t help laughing pretty hysterically whenever I think of it! The only thing still missing was a little footage of an old clock which Ross and I sneaked in on the way home just after 11 pm.

About seven different versions of the Punch Trailer were bandied around in cyberspace before we settled on what you see here. My teenage daughters recorded the panicked screams at a party with friends, but the volume had to be very low – it really just sounded like teenagers having fun. We had to abandon one of my very favourite shots, of the talent running across an old Victorian footbridge with Inverness Castle looming behind – simply because a moving car in the very background instantly broke the Victorian feel, and though it’s tiny, once I had seen it I couldn’t unsee it.

Punch by Barbara Henderson is published by Cranachan Publishing on 23 October priced £6.99.

‘He shot a sea bird, and we landed on a sand bank where I obtained specimens of shell fish. In the e … 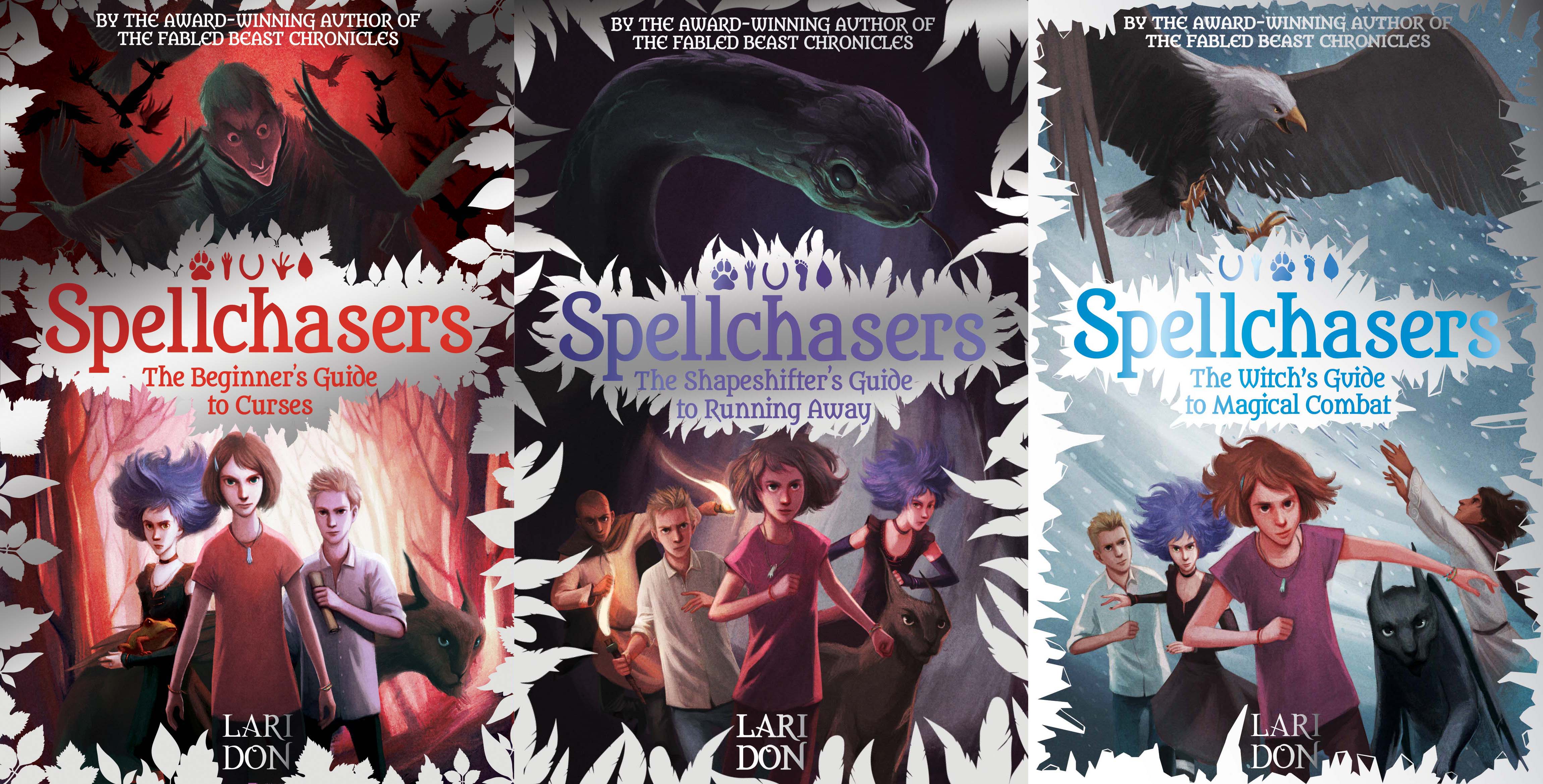