‘Wouldn’t it be great to bind the connections between Scotland and Iceland further by spreading the good news of Jolabokaflod this Christmas?’

In this guest post Christopher Norris, founder of the unique Jolabokaflod Book Campaign, proposes spreading the good news of Iceland’s inspiring Jolabokaflod book gifting tradition far and wide this Christmas to remind us why books are so essential to our lives.

This seasonal Icelandic tradition is making its mark on the collective Scottish imagination, especially as First Minister Nicola Sturgeon is forging new political and cultural links between the countries. Ties between Scotland and Iceland are getting stronger with respect to issues like tourism and climate change. Jolabokaflod is helping to foster this friendship through a shared love of books and reading, with Publishing Scotland’s #ScotBookFlood campaign setting a great example as part of this year’s Book Week Scotland, run by Scottish Book Trust.

The retail cycle each year in Iceland, from the launch of new books to the reading of these books at Christmas, is known as Jolabokaflod , which translates roughly into English as ‘Christmas book flood’.

This tradition began during World War II once Iceland had gained its full independence from Denmark in 1944. Paper was one of the few commodities not rationed during the war, so Icelanders shared their love of books even more as other types of gifts were short supply. This increase in giving books as presents reinforced Iceland’s culture as a nation of bookaholics – for example, a study conducted by Bifröst University in 2013 found that half the country’s population read at least eight books a year.

Every year since 1944, the Icelandic book trade has published a catalogue – called Bókatíðindi (‘Book Bulletin’, in English) – that is sent to every household in the country in mid-November during the Reykjavik Book Fair. People use the catalogue to order books to give friends and family for Christmas.

During the festive season, gifts are opened on 24 December and, by tradition, everyone reads the books they have been given straight away, often while drinking hot chocolate or a Christmas ale cocktail called jólabland.

As I was a pioneer of World Book Day in the UK, serving on the steering committee for the inaugural event in 1996-7, I realised that the Icelandic tradition of Jolabokaflod offered a fabulous opportunity to promote book buying and reading within the same initiative, so the seeds of the Jolabokaflod Book Campaign were planted.

In my concurrent role as Head of Crowdfunding at CrowdPatch, I saw the opportunity to release people’s enthusiasm and creativity for running crowdfunding campaigns along Jolabokaflod principles – to buy books to give to others for active reading. 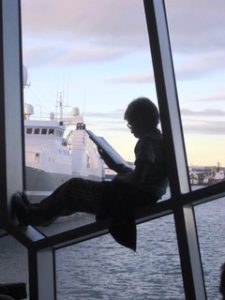 A scenic spot for reading at Reykjavik Book Festival

The Jolabokaflod Book Campaign at Christmas 2017

There are always moments in every household when there is a temptation to switch on the television or play a computer game. The Jolabokaflod Book Campaign encourages people to make time for family reading over the festive season and reminds everyone that reading for pleasure is fun and therapeutic.

I am encouraging Scots, and everyone else in the UK, to integrate Jólabókaflóð into the way we celebrate Christmas and – via the Book Bulletin online catalogue – to recommend the books we love.

The Jolabokaflod Book Campaign is a not-for-profit book trade and reading initiative to encourage people everywhere to buy books to give to their loved ones to read over the festive season. All profits are reinvested into our campaign projects and events.

The Book Bulletin comprises recommendations of new books and old favourites and advertising for people making the recommendations. Here is the contents page of the online publication, for you to find your way around the catalogue as recommendations are added during the Winter 2017 period.

You can see examples of how we display the book recommendations by viewing books loved by Leonardo DiCaprio, Naomi Campbell and Mark Zuckerberg, revealed at the Frankfurt Book Fair in October 2017.

The 2017 campaign started officially on 21 October 2017 (‘The First Day of Winter’ in the Old Nordic calendar), covers the Christmas holiday period and concludes on 14 February 2018, as St Valentine’s Day is also International Book Giving Day.

From the book trade perspective, Jolabokaflod creates a fabulous new opportunity to promote and sell books. A publisher, for example, only has to sell one book to be in profit after making a financial contribution to the Book Bulletin crowdfunding campaign, which is raising money for the Jolabokaflod 2018 programme. The Jolabokaflod Book Campaign publicises book recommendations in the catalogue via digital media, so we actively support publishers in their ambition to sell more books.

My hope for this year’s Book Bulletin campaign is to increase market awareness of the Jolabokaflod tradition. I have big plans in the pipeline for next year, including a summer version of the online catalogue and a new, members-only club with a full programme of regular events. 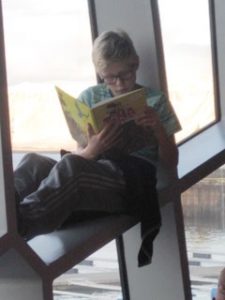 A reader at Reykjavik Book Festival

How you can help to spread the tradition of Jolabokaflod

Jolabokaflod is essentially a simple, viral concept – to encourage people to buy books as Christmas presents to give to friends and family for reading over the festive season. There are many ways in which you help to this Christmas tradition to spread: here are a few ideas:

Scotland and Iceland are linked via their respective literary heritages. Indeed, these cultures are recognised worldwide: Edinburgh and Reykjavík are both UNESCO Cities of Literature. Wouldn’t it be great to bind the connections between Scotland and Iceland further by spreading the good news of Jolabokaflod to families this Christmas and getting involved with Publishing Scotland’s #ScotBookFlood campaign. Let’s invite everyone in Scotland to make this wonderful tradition part of the way in which the festive season is celebrated. Let’s promote Jolabokaflod to remind everyone why books are so essential to our lives.

I plan to buy two books with a Scottish connection this Christmas, both non-fiction, and I’ll be making sure to use the #ScotBookFlood hashtag in my social media posts.

I’ll be giving my girlfriend a copy of Samuel Bostaph’s forthcoming book, Andrew Carnegie: An Economic Biography. She is a Canadian-American who runs a not-for-profit campaign to support the idea that people are more important than products. The great Scottish-American industrialist and philanthropist is a fabulous example of someone she can aim to emulate.

Also, Nancy Marie Brown writes extensively about Iceland. I have my eye on her book Ivory Vikings about the history and politics behind the famous Lewis Chessmen, discovered in the Outer Hebrides in 1831. I have a friend who loved reading the 2010 Edmund de Waal’s family memoir, The Hare with Amber Eyes, centring on his uncle’s netsuke collection. Brown’s book looks like a fascinating companion piece; I’ll be snaffling a copy myself as well, as I’m a sucker for history, especially with a Viking flavour.

Christopher Norris is the Founder and Curator of the Jolabokaflod Book Campaign, a not-for-profit enterprise to introduce the Icelandic tradition of Jolabokaflod to the UK and beyond. He is also Head of Crowdfunding at CrowdPatch, the crowdfunding platform for social entrepreneurs.

The photographs from Reykjavik Book Festival in this article are by Christopher Norris.

‘Anne introduced me to many fantastic Scandinavian treats. Her Glogi (Finnish mulled wine) was the b …