‘I realised my experience of motherhood, though personal and bespoke, might be useful for others to hear.’

Books from Scotland meets Moire O’Sullivan, an accomplished mountain runner and adventure racer. In 2009, she became the first person to complete the Wicklow Round, a 100km circuit of Ireland’s Wicklow Mountains run within twenty-four hours. The proud mother of two young sons, her new book Bump, Bike and Baby is about her inspirational personal journey, as Moire reveals in this Q&A…

What inspired you to write Bump, Bike and Baby: Mummy’s Gone Adventure Racing?

Early last year, during a catch-up call with my coach Eamonn, he asked me if I could chat with one of his other athletes. I was surprised by his request. Eamonn never divulges the identities of those he trains, let alone providing me with their names and phone numbers.

“Sure,” I said, feeling like I owed him a favour after all the support he has given me over the years. “What it’s about?”

“Well, she’s just found out she’s pregnant,” Eamonn explained. “I thought it might be helpful if she spoke with someone like yourself.”

It was while talking with Eamonn’s athlete that I realised my experience of motherhood, though personal and bespoke, might be useful for others to hear. I figured there must be other women in similar situations, trying to learn how to become a parent while still keeping a semblance of their old identity. I thought they might benefit from reading what happened to me.

Who do you think should read your book?

For those who have not yet experienced parenthood, I hope the book gives some insight into how children can radically change them and their lifestyles in so many, often unexpected, ways.

For women who already have kids and are struggling to get fit after childbirth, I hope Bump, Bike and Baby will help inspire them to get moving again.

There may be some insight for Dads in the book also. It may help them understand what happens to their competitive wives and partners when they go through pregnancy and childbirth. 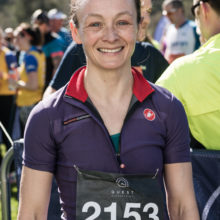 Juggling writing, having children, and competitive sports – how do you do it?

My husband Pete and I have had many conversations about how to help each other cope with parenthood. In particular, Pete knows how hugely important training is to my psyche. Having a supportive partner, who understands that I need a daily break from motherhood in order to train, is a major component in helping me strike that balance.

I know I am very lucky that I can be a stay-at-home mum. This means that I have the flexibility to both write and train around my kids. For example, when I was writing Bump, Bike and Baby, my youngest child was taking two-hour afternoon naps. So, as soon as he dropped off, I would turn on Cbeebies to distract my eldest son while I scribbled down my personal daily target of a thousand words.

Having worked for international aid organisations as mentioned in the book, I wondered if you could tell us a bit about the differences between pregnancy in the UK / Ireland and some of the locations you’ve worked in?

I am extremely lucky in that I had the choice to give birth and raise my two children in Northern Ireland. The health care that is available is incredible, and I sincerely indebted to the NHS for providing amazing levels of support throughout my ante and post-natal stages.

Women who live in developing countries often are not as fortunate. Every day, approximately 830 women die from issues associated with pregnancy and childbirth. 99% of these maternal deaths occur in developing countries. So dying as a result of becoming pregnant is a significant reality for women living in these lower-income areas. This is a horrific reality, especially when most of the actual causes are treatable and preventable.

There are a lot of books about running and getting out in the hills written by men – how do you think we can move towards a greater number by women?

Sometimes all women need is need a little encouragement. In some cases, I sense that women don’t believe that their stories are worth telling, even though they have overcome significant obstacles and achieved incredible things. In many cases, the obstacles overcome are more significant that those at times faced by men.

So if you know a female who runs or enjoys the hills who you feel needs to tell her story, don’t just passively wait for her to do it: instead actively encourage her to write it down, and help her to spread it far and wide.

‘I realised my experience of motherhood, though personal and bespoke, might be useful for others to …