Books from Scotland gains early insight into a new book by Glasgow-based Laura Tansley and Micaela Maftei, who is based in Victoria, British Columbia. Entirely collaborative despite the distance between the authors, each story is co-written, and the collection explores themes including place and displacement. It is published by Vagabond Voices later this year.

The following is an excerpt from Woods for the Trees, which appears in the yet-to-be-named short story collection co-authored by Micaela Maftei and Laura Tansley, which Vagabond Voices will be publishing later this year. It’s a unique project both in its content and its creative process, as the authors have written each story together, and have collaborated via digital methods transatlantically. As such, place and displacement form a significant element of both the authors’ process and the finished creative product. The stories that make up this collection explore how it feels to be neither/nor, how it feels to be constantly arriving or departing and never truly fixed.

What stands out with this collection is the way in which the authors explore selfhood, and womanhood in particular, as it presents itself in private and public spaces, as well as in the spaces where the two interlap. All of the stories feature real situations that will resonate with readers, yet they are written with a style and poeticism that brings everyday experiences into a more literary space. 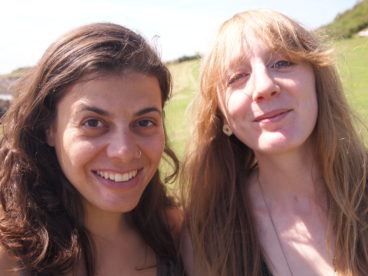 Woods for the Trees

At work there was a piece of post on her desk; ominous, she thought, that whatever it was required her to have a written copy. It turned out to be an invitation to management training being held in a hotel somewhere in the city centre. She spent her lunchtime trying to locate it but the chain had so many outlets she couldn’t figure out exactly where she’d be staying. Working through their automated phone system she discovered all their rooms had the same amenities anyway, everywhere across the world, so she figured it didn’t really matter.

When the car came for her the next morning there was already a passenger in it. Sunglassed and stoic, she courtesy-smiled when Christy climbed in and said nothing for three-quarters of an hour till they pulled in to a glass-covered courtyard and the driver dropped them off at an outdoor check-in desk.

“They do that on purpose you know, drop you off right at the desk. Your feet never touch the pavement and there’s no danger of anyone getting distracted and deciding they want to explore,” the woman said, slinging her suit bag off her shoulder and on to the outstretched arm of a pristine porter who shone immaculately from her hair to her leather shoes. “Give her your bags too; we have adjacent rooms. I’m Sharon.”

They were directed to a different lift than the one that the porter and their bags disappeared into. It came casually, giving Christy the chance to sit on a chaise longue and check out the enormous atrium which extended up through the centre of the first few floors like a panopticon. She hoped their rooms were higher up and had an outside view, but chances were if she had windows they would be facing another hotel just like this one; mirrored buildings copy-catted each other across the breadth of the city.

“So have you done this training before?” Sharon asked as the lift doors closed and they headed up to their rooms.

“My whole section is getting trained again. We’re being assessed. Restructuring.”

“I did this exact series two months ago. But CPD is important to me. I’m happy for this opportunity.”

“Plus I’m a fucking leader. I’m ready for this.”

From floor fifteen to forty they stood still and silent until the doors opened. Sharon gestured her out and followed her down the hall half a step behind.

“463, that’s me,” Sharon efficiently swiped her key. “See you later,” she said and disappeared.

Christy fished for her own card in her jacket pocket. Back along the corridor towards the lifts another woman waited with her back turned. Christy watched as she hitched up her skirt, turning it inside out, up and over her waist to tug at her tucked-in shirt revealing black knickers, Lycra with a kind of lace trim framing the woman’s petite butt that was perked by her black patent high heels. She righted herself, the lift arrived, she stepped in and was gone.

There was an itinerary on the writing desk in her room that said “welcome drinks at five”, which gave Christy enough time to count out the feet of her room (same as her entire flat) and change into something smart-casual. She steamed out the creases in her shirt which had collected around the curves of her shoulders in the car, but kept her hair down. She put lipstick on thinking she should draw attention to her mouth. She swapped her bra from white cotton to navy lace. She took her handbag rather than a briefcase but made sure she had a pen and notepad. She knocked on the door of the Sharon’s room thinking it’d be nice to travel down together even if Sharon had seemed odd but she got no answer so went alone. The bar was on the third floor, open-planned and looking out on to the atrium. She spotted Sharon with a glass of white wine holding court with four people surrounding her. Christy watched as she spoke, saying something which made all four laugh then leave, each scattering in a different direction. Christy picked up a red wine from a round table dressed in the company colours and walked over to her.

“Good, good. I’ve only been down here for half an hour and I’ve already made incredible contacts.”

It was only ten to five. Christy had been concerned at appearing too punctual, but had clearly missed the boat already.

“I saw you talking, were those colleagues of yours?”

“What, just now? No, no. More like acquaintances. We met at a company microbusiness and mindfulness retreat last year.”

“Oh I see.” Christy looked around and saw them all, now in different groups, engaged in conversation with other similar-looking people.

Almost in complete synchronisation, each one of Sharon’s mindful companions laughed, big open-mouthed, close-eyed flirtatious laughs, shook one or two hands, then moved to join a different group of people to start the process all over again.

“They’ll do that three or four times, then come back together to talk about how they’ve read the potential in the room.”

“So they’re not in competition with each other then?”

“What do you mean?” She wrinkled her nose at Christy.

“I’ll join. Let’s go do some power posing before the big boss gets here.”

In the ladies Sharon picked a cubicle (she wanted privacy and was conscious of the copyright on her own poses), leaving Christy outside looking at the space between Sharon’s small feet poking out under the cubicle door as she took up some kind of superman stance.

“What division are you?” Sharon shouted.

“Do you know Kevin?”

“Does he work in Eight or Twelve?”

Christy stroked the aluminium of the faucet. It felt oddly warm.

“This has been proven scientifically, by the way.”

“The efficacy of power posing. I’ll be frank: ‘you’re the only one getting in the way of you’.”

Christy knew it was a quote even though she couldn’t see Sharon hands making the marks in the air.

“Never mind. You’ll pick it up on your own, or you’ll never learn.”

Christy thought for a second then grabbed her crotch in Sharon’s direction.

Micaela Maftei and Laura Tansley’s forthcoming book will be published later in 2018 by Vagabond Voices.