‘This is not about charity or about improving the education of women. It is all about income generation.’

Shreela Flather cogently argues that women must be central to every initiative, business project and political goal rather than being merely after-thoughts or decoration. For Shreela, it is all about income generation, and her book calls on international businesses to improve efficiency and profitability through the greater employment of women.

Extract from Woman: Acceptable Exploitation for Profit
By Shreela Flather
Published by Whittles

The poorest women of the Indian sub-continent and Africa represent a vast untapped resource and are easy to find. They are hard-working and eager to learn – the perfect workforce. But today they have no sense of self-worth; they murder their own baby daughters because they are deemed to be of no value, indeed harbingers of debt; too often they are regarded as little more than beasts of burden, or they are hidden away, deprived of education and position.

I want to turn these countless millions of wives, mothers and daughters into profit generators for themselves and for the global business community. I will tread on a few toes along the way, tackle the great taboo of children working for a living and face up to arguments against managing an ever-increasing population using birth control. You can’t talk about the role of women in isolation from their sex lives.

I will challenge politicians to turn talking shops into practical action; the much vaunted United Nations Millennium Development Goals (MDGs) dream cannot be fulfilled by the target date of 2015. Its only hope is to shift the focus to women. While the UN rightly identifies the private sector as the ‘engine of innovation and growth’, it fails by not targeting that effort at women directly. As part and parcel of that refocusing, it should start talking about family planning. 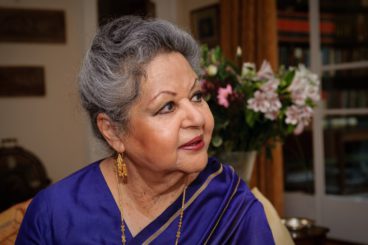 Women must be central to every initiative, business project and political goal, rather than afterthoughts or decoration. And, dare I say, this is just as applicable to the West, and the UK in particular, where the Equality and Human Rights Commission reported in September 2008 that the number of women in top jobs was actually falling; far from breaking through the glass ceiling, women have crashed into impenetrable triple-glazing. So let no one say that the case for women’s rights anywhere in the world has been addressed fully, let alone met. When we stop saying with surprise that the head of some corporation or organisation is a woman, then I will feel satisfied.

I am convinced that if the male mindset can be changed then the women will take care of the rest. The result will be profit for business, income and welfare for poor families, rescue for the environment and votes for politicians. The arrogance is not in maintaining that any single idea can bring about a change: rather it is in believing that the status quo can continue. As we slide ever deeper into global economic depression, this above all is a hopeful book offering a practical, affordable way forward. It requires no new energy source, it demands no vast capital investment and it will have no destructive impact on the environment. The workforce is vast, willing and able. A mother will not squander her money; she will nourish her children rather than drinking herself into oblivion, and she will remain loyal to her family.

This is not about charity. It is not about improving the education of women. It is all about income generation. Woman: Acceptable Exploitation for Profit is a solution for a world in trouble, a roadmap to greater opportunities, profit, prosperity, health and happiness for all, regardless of gender. And before this notion is dismissed as fanciful wishful thinking, critics should first consider some of the examples where a handful of enlightened business leaders are already reaping the rewards, just as their new female workforce is transforming their own lives and those of their families and villages.

This is not pie-in-the-sky: it is happening, but so far this practical and demonstrably successful concept has not received the recognition it deserves. We live in a world struggling to feed itself, fund itself, preserve itself, so why reject an asset and talent we have failed to consider?

Woman: Acceptable Exploitation for Profit by Shreela Flather is out now published by Whittles priced £16.99.