‘The excitement that each split may reveal beautiful shiny black scales and the first look at a curious ancient fish is rapidly lost. But with experience and some knowledge of collected specimens, the fossil hunter learns to look for black or rusty red weathering colours in the grey-green rock.’

This fabulously titled book is an excellent guide to geology, particularly for a beginner. Reading through it encourages you to get outdoors and get up close to Scotland’s amazing landscapes. Here’s an extract detailing Hugh Miller’s influence in looking at fossil fish in the Caithness countryside. 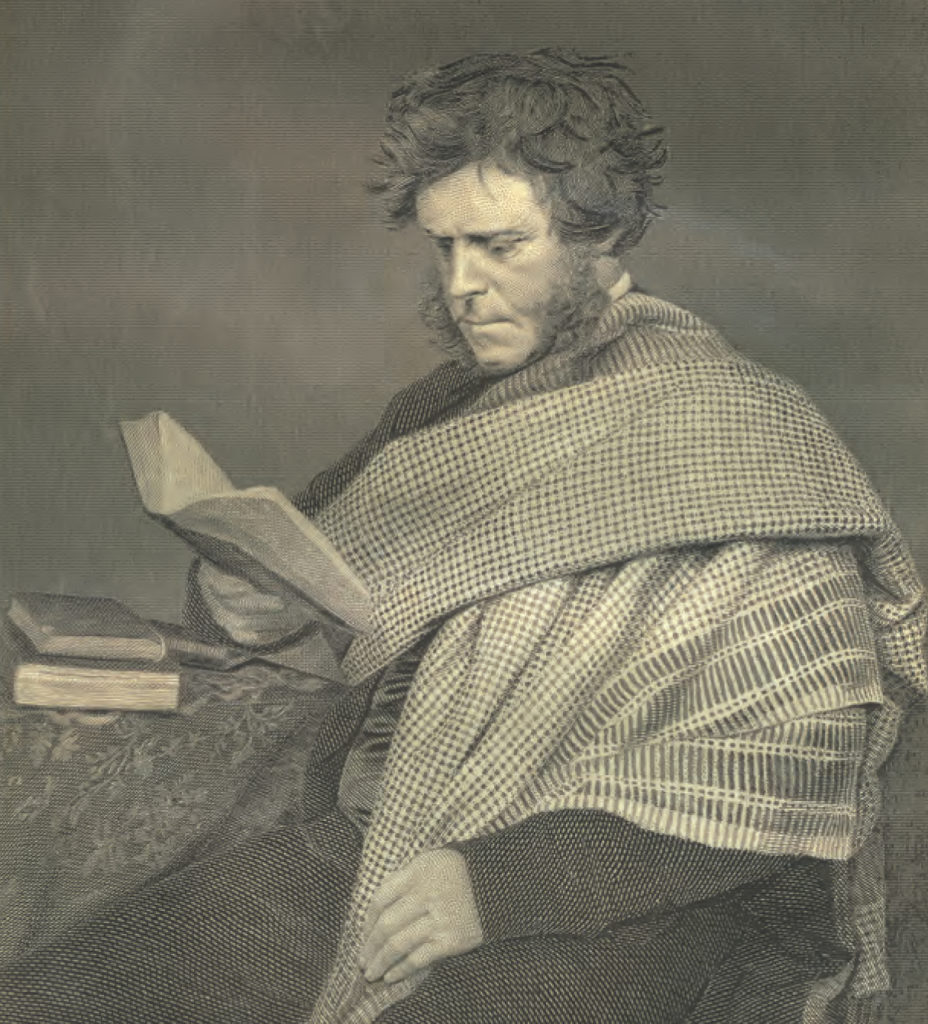 A portrait of Hugh Miller. Engraving by Bell of a photograph by Tunny, courtesy of the Hunterian Museum and Art Gallery.

Hugh Miller (1802–1856) was born in the Black Isle fishing village of Cromarty, sheltering under the Sutors at the entrance to the Cromarty Firth, 60km north of Inverness. He became a quarryman at 15 and then, by sheer intelligence and force of character, some 20 years later had become the authority on the geology of the Old Red Sandstone in Scotland, especially the Highlands. He became fully embraced by the ‘socially superior’ geological community in London, a remarkable achievement in Victorian times. He was a very religious man, an excellent writer, and became a renowned Edinburgh newspaper editor. His geological classic is The Old Red Sandstone mentioned above, but he also produced a number of other geological works such as Footprints of the Creator (1849) and The Testimony of the Rocks (1857), all being an inextricable mixture of rocks and religion, of nature living out God’s will. But this is not to underestimate his science: he was an observant, gifted and enthusiastic scientist. Miller was not only unusual in his background, he was physically so as well; tall, rugged, with a full head of shaggy sandy hair, and was usually dressed roughly in a plain shepherd’s plaid, preserving the image of his origins. ‘He never looked grander than a working man in his Sunday best,’ said a friend. He was a distinctive personality and a great speaker with a broad Ross-shire accent, keeping audiences of thousands rapt with descriptions of rocks and fossils, especially ladies, it seems. He was a thoroughly likeable character and when he died in Edinburgh, the centre of the city was closed for his funeral.

The place where we are going to start this chapter has been designated a Site of Special Scientific Interest (SSSI), and to visit needs a permit from Scottish Natural Heritage (SNH). It is an inconspicuous quarry near Spittal, 24km south of Thurso, at the end of a long farm track on top of a low hill in the searchingly flat Caithness countryside. The quarry itself is entirely unremarkable at first sight: water-logged, no remaining worked face, a ruined building and a lot of broken rock spoil clambered over by cows. Yet over the years this quarry has provided thousands of beautifully complete fossil fish, it having been excavated unintentionally into the Achanarras fish bed. This is why permission is needed from SNH to visit, hit the rock and to collect the fossils. A few years ago a Dutch team brought power drills and heavy equipment to improve their collecting efficiency! Not allowed; the rules are one hammer and a few fossils.

There is a mystery here, though. The rock is perfectly layered to resemble pages in a book and you can sit in the quarry for hours splitting layer after layer and find absolutely nothing. The excitement that each split may reveal beautiful shiny black scales and the first look at a curious ancient fish is rapidly lost. But with experience and some knowledge of collected specimens, the fossil hunter learns to look for black or rusty red weathering colours in the grey-green rock. The truth is that the magnificent fossils really are abundant, but only in a very precise layer two metres thick, hence the name ‘fish bed’; the fossils are not scattered throughout the rock. Fish beds are now a known feature of the Old Red Sandstone of Caithness, Cromarty and the southern shore of the Moray Firth, but it originally took Hugh Miller years to find some of them even though he was on the rocks every one of his working days.

Why are the fossils so distributed? Why are they concentrated only in the thin fish beds?  Do the thin layers of abundance represent a time when a huge number of fish lived? Or do they represent the catastrophic death of a whole fish population? Perhaps there is something special about their fossilization?

The different degrees of entireness in which the geologist finds

nature of the rock in which they occur

was Hugh Miller’s surprising (and accurate) observation. What was special for him, evidently, was the fossilization. But we should try to find out for ourselves, because it affects our understanding not just of these fish fossils but of the entire fossil record, what we say about evolution and what we give as the age of a rock. Fossils cannot be considered in isolation, they are inextricably linked to the sediments in which they are found, ‘the nature of the rock’. The sediments represent both the environment of the living animals and the medium in which they are preserved.

Miller would not have known the Achanarras quarry; it was opened in 1870, twelve years after his death. This is a shame. He would certainly have revelled in the abundance of the fossil fish although, at the same time, have been surprised and fascinated by the way in which the sediments and the fossils themselves have now been analysed.

What is immediately remarkable about the rocks of the quarry and indeed all the rocks of the Caithness area, is their extreme, regular layering. These are the Caithness Flags, famous for covering floors around Europe, all the way from many Scottish kitchens, to the Royal Mile, to many streets in Edinburgh and now the infamous new Scottish Parliament building. The flags are so readily available in the north that lines of them are used to separate fields instead of dykes (stone walls) as in Sutherland or hedges in lusher counties. The amazingly flat beds were caused by the exceedingly regular accumulation of sediments in the huge freshwater Orcadian lake that stretched from Cromarty to Caithness to the Orkney Islands and to the west coast of Norway during the Middle Devonian, 374–387Ma. With a size of about 700 by 300 kilometres, it was larger than the individual North American Great Lakes and comparable with the size of the present Black Sea. But undoubtedly, during its 13 million years or so of existence, lake outlines shifted and water stands were often temporary, similar to the lakes of the present day African Rift. Over 5000m of stratified flags accumulated during this time, in the general area of the slowly sinking but usually isolated Orcadian Basin. The powerful, vertical cliffs of Caithness and Orkney are the remains of this remarkable sequence, the Old Man of Hoy their famous statue. Incredibly, throughout this whole Orcadian lake sequence the flaggy layering persists. Each flag is usually about the thickness of a paperback book and exceedingly flat, which gives it its economic worth. Although persistent, the layering shows subtle changes related loosely to the silt, sand and shale content. All the fish in the Achanarras Quarry come from a thickness, as I have said, of only two metres, and through this interval the individual layers are extremely thin. The fish beds are in fact laminites, that is, sediments with paper-thin layering. It is only in the laminites that the fish are found: or is it preserved; or is it lived; or is it died?

Although not visible without draining, researchers have found that the sedimentary layers of the Achanarras quarry form a sequence of gradually increasing particle size and lamina thickness from the bottom upwards. Ten metres are found at the quarry, but when complete, it is about 60m thick. The finest particle size and thinnest layers at the bottom of this sequence are the two metres of laminites where the fish are found. They occur nearly at the base of the quarry. The laminites were deposited in still water, deep for a lake, perhaps 80m. The thicker layers at the top of the sequence show fossilized ripples and mud cracks and clearly come from very shallow water, which even occasionally dried out. The rocks in the quarry are the remaining evidence of an episode when the lake became progressively shallower as time went by. It slowly filled with sediment and the lakeshore eventually passed over the quarry site, whereas before it had been a long way off. When the lakeshore environments were present, the water was well oxygenated and any organic remains in them would have been consumed by bacteria or predators or dispersed by water currents. On the contrary, when the deep water was present, the lake floor would have been anoxic, that is without oxygen. There would have been no bacteria or predators and no water movement, which would have been ideal for the preservation of organic matter. This, of course, is where the fish remains are. But did the fish only live when and where the water was deepest?

‘Go and hear the water in the wood as it splays downhill cold as Greenland.’