‘In the last three or four decades something remarkable has happened. There has been a widespread and striking revival of interest in the practice of pilgrimage across Europe.’

Scotland’s long distance Ways have been a mainstay for tourists and residents for a long time, and the resurgence of pilgrim trails is a welcome addition for those interested in the landscape and history of Scotland. In July, The Fife Pilgrim Way opens, and here we share an extract from the guide to the trail, brought to us by Birlinn Ltd.

Extract taken from The Fife Pilgrim Way: In the Footsteps of Monks, Miners and Martyrs
By Ian Bradley
Published by Birlinn Ltd 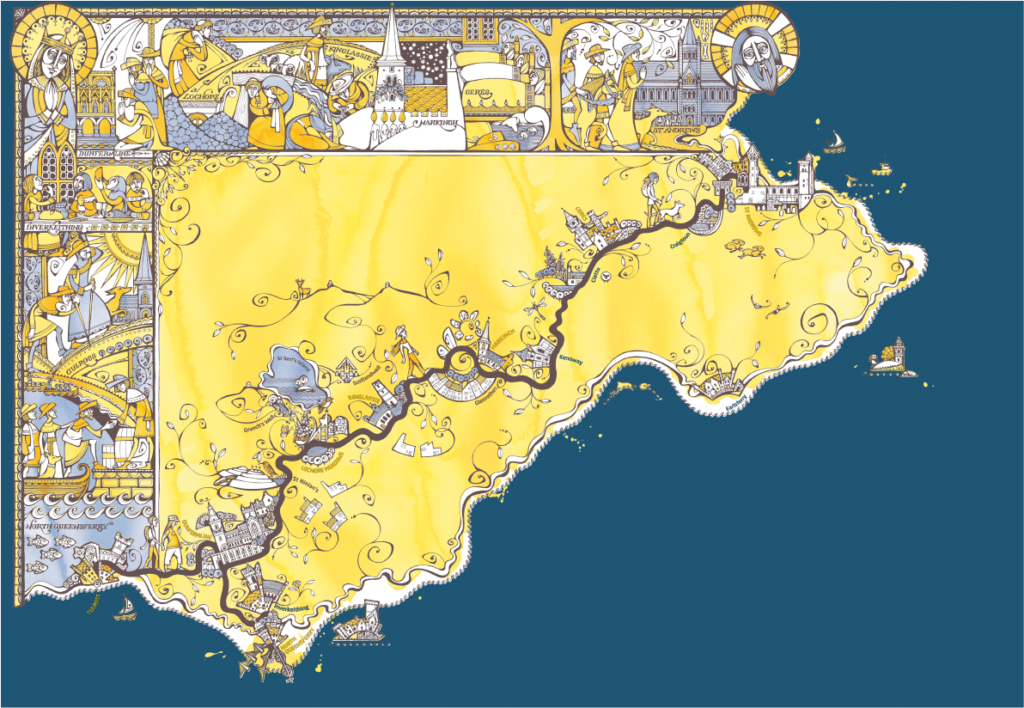 Fife was long known as the pilgrim kingdom. This is because within its bounds were found the two most important places of pilgrimage in medieval Scotland, Dunfermline (which was also the residence of successive Scottish monarchs – hence the kingdom designation) and St Andrews. At the height of the pilgrimage boom in the Middle Ages, thousands of people from many parts of the British Isles and beyond traversed Fife to venerate the shrines of St Margaret and St Andrew. In the words of the medieval historian Tom Turpie, ‘The economy, communication networks, landscape and religious and cultural life of Fife, perhaps more than any other region of medieval Scotland, was shaped by the presence of pilgrims and the veneration of saints’ (Turpie 2016: 4).

The Fife Pilgrim Way, officially opened in July 2019, allows modern pilgrims to follow in the wake of their medieval predecessors and walk, cycle or otherwise make their way across Fife towards St Andrews on a route that has two starting points on the northern shores of the Firth of Forth: Culross, with its associations with two early Scottish saints, and North Queensferry, where Queen Margaret established the ferry crossing for pilgrims going to St Andrews. It is based on the premise that following in the footsteps of medieval pilgrims across Fife is a great way to discover the region’s remarkable past, its lively modern communities, countryside, historic towns and natural treasures. But it is much more than an exercise in historical reconstruction. For a start, it does not follow the route taken by most medieval pilgrims who would have gone directly north from Kelty to Loch Leven and travelled on via Scotlandwell, taking a more northerly course. The modern pilgrim way has been deliberately routed through old mining and industrial areas of West Fife and the new town of Glenrothes. This is partly in the hope of bringing economic and other benefits to places which have experienced decline and do not see many visitors or tourists, as has happened in Galicia in Spain, the site of Europe’s most famous pilgrim way, the Camino de Santiago, which leads to the shrine of St James.

There is also a conscious desire that those journeying along the Fife Pilgrim Way will not only see pretty vistas and affluent villages, but also come into contact with places and people that have not been so favoured. King James VI of Scotland (later King James I of England) famously described Fife as ‘a beggar’s mantle fringed with gold’. The golden coastal fringe, with its quaint fishing villages and breathtaking views across the Forth, has long been the route of a hugely popular walk developed and maintained by Fife Coast and Countryside Trust.

The practice of pilgrimage, understood as a departure from daily life on a journey with a spiritual intention, and often – although not invariably – to a destination with a religious significance, is a central feature of all the world’s major faiths. It is not obligatory for Christians but it has long been a significant aspect of Christian life and devotion. Jesus sent out his disciples to preach the kingdom of God and to heal, telling them to go from house to house, taking nothing on their journey. Some early Christians, like the Celtic monks who wandered across continental Europe as well as around the remoter shores of the British Isles, took to almost perpetual pilgrimage as a demanding form of witness and exiled themselves from home comforts as they sought to follow the Son of Man who had nowhere to lay his head. The desire to walk in Jesus’ footsteps led other early Christians to journey to the Holy Land. As the cult of saints developed and certain places came to be seen as especially sacred, Christian pilgrimage reached its zenith in the Middle Ages, with thousands travelling for many months across Europe to Rome, Santiago, St Andrews, Dunfermline and other shrines associated with apostles, saints and martyrs.

Pilgrimage effectively ceased in Scotland with the Reformation. In fact, there is considerable evidence that St Andrews was in significant decline as a pilgrim destination fifty years or so before Protestantism was officially established in 1560. For the next 400 years and more pilgrimage and pilgrim places largely disappeared across Scotland as they did across the whole of Protestant Europe. The Reformers had good and understandable reasons for attacking the practice of pilgrimage, which had become associated with the buying and selling of indulgences and the idea of paying your way into heaven. The result was that pilgrimage became almost a dirty word in Scotland, at least in Presbyterian circles.

In the last three or four decades something remarkable has happened. There has been a widespread and striking revival of interest in the practice of pilgrimage across Europe. Somewhat surprisingly, perhaps, given its reputation for Presbyterian disapproval of the more Catholic practices of the Middle Ages, Scotland is in the van of this movement, with more new pilgrim routes being created here than in any other part of the United Kingdom. Significant initiatives across the country have been stimulated by a combination of local enthusiasm and support from the Scottish Government and local authorities keen to promote health, well-being and economic regeneration, as well as revived interest in local saints, and the Scottish Pilgrim Routes Forum’s efforts to bring together interested parties within churches, heritage groups and the tourism sector. Lingering Presbyterian unease has at last been put to rest, not least by a spectacular vote of confidence at the 2017 General Assembly of the Church of Scotland, which passed with acclamation a deliverance from its Church and Society Council affirming the place of pilgrimage within the life of the Church and encouraging congregations to explore opportunities for pilgrimage locally and the provision of practical and spiritual support for pilgrims passing through their parishes.

The Fife Pilgrim Way is one of six major walking and cycling pilgrimage routes currently being developed across Scotland by steering groups made up of local enthusiasts, churches, voluntary bodies and local authorities. Many of these volunteers represent member organisations of the Scottish Pilgrim Routes Forum, a national network set up in 2012 and a fully constituted Scottish charity which supports and facilitates the work of the steering groups and meets twice a year in locations closely associated with their work. The most ambitious of the new pilgrim ways will be a 185-mile coast-to-coast route linking Iona and St Andrews, two of Scotland’s most iconic religious sites and places of medieval pilgrimage. The second longest, initially created in 2013 by a group of enthusiasts from Paisley Abbey, is the 149-mile Whithorn Way from Glasgow to Whithorn, once the site of a major cathedral associated with St Ninian and an important place of pilgrimage since the seventh century. The 72-mile Forth to Farne Way, linking North Berwick to Lindisfarne, opened in 2017. In north-east Scotland, the 40-mile Deeside Way follows the route of the old railway track between Aberdeen and Ballater. The most northerly of the new pilgrimage routes is the St Magnus Way, a 55-mile walking trail across mainland Orkney from Evie to Kirkwall, opened in 2017 to mark the 900th anniversary of the martyrdom of Orkney’s patron saint. The development of these six routes represents the beginning of a longterm strategy co-ordinated by the Scottish Pilgrim Routes Forum to create opportunities for local people and overseas visitors alike to learn from and experience Scotland’s rich pilgrimage heritage through the outdoor environment.

The Fife Pilgrim Way: In the Footsteps of Monks, Miners and Martyrs by Ian Bradley is published by Birlinn Ltd, priced £14.99

‘Fear not the Dark Dragon of Dunvegan. If it should ever awake from sleep.’