PART OF THE Sweet Inspiration ISSUE

‘The fact that the Corncrake is such an unobtrusive, retiring species is both its attraction and its potential undoing’

The Corncrake by Frank Rennie, aptly subtitled ‘An Ecology of an Enigma’, charts the lifecycle of the fascinating bird, offering a comprehensive reference to the small creature. You can read more from this exclusive extract on BooksfromScotland below.

Apart from the Corncrake, there are few other bird species that are known and recognised by thousands, probably tens of thousands, of people who have never even seen the bird and would no doubt struggle to identify the species from among a random selection of bird images. Yet that is the current situation. Despite being one of the most intensely studied bird species of farmlands, so much more detail remains unknown. The opening sentence in the introduction to an academic journal published in 2016, which was entirely dedicated to the Corncrake and contained some of the papers recently delivered at an international scientific conference on the species, began with:

‘Even at the end of the 1980s, the Corncrake was perhaps one of the least wellknown breeding bird species in Central Europe. Our knowledge about issues like habitat selection and habitat use, mating system, breeding biology or movements during and between seasons was very limited, to say the least.’ (Schäffer, 2016)

Each spring, the distinctive rasping call of the male bird loudly announces its arrival from a warmer climate. Its Latin specific name, Crex crex, seems to emulate the sound of that call. In fields and gardens, people working or simply walking in the countryside prick up their ears and become more alert. They will nod knowingly to each other. Among friends and neighbours there can almost be an unofficial competition to be the first person to hear the call. It’s back! To many, the Corncrake is a talisman announcing the arrival of the new season, and they are often gently protective of the moment. Further south they might note the first sound of the Cuckoo on their calendar, but in the north and west, the Corncrake is the bird that people listen out for. Even people who do not know any other bird call will know the sound of the Corncrake, but of the many listeners, probably fewer than one in a thousand will ever see this bird.

Not only is the behaviour of the Corncrake normally rather reclusive (apart from announcing their territory for hours on end from their hiding places), but they also select some of the quietest and most beautiful locations for their breeding. For me, this is a major part of their attraction.

Most of my experience with the Corncrake has taken place in the communities that I live among, in the islands of the Outer Hebrides of Scotland. In the Isle of Lewis, where my home is, the Corncrake is more commonly mentioned by its Gaelic name – the Traon (sounds like tr-euh-n with a long, flat, almost nasal intonation to the vowels). For more years than I can recollect, visitors arriving at Stornoway airport at the start of the summer breeding season would be greeted by the distinctive call of a Corncrake as they emerged from the terminal building. The more optimistic (or naïve) of those arriving passengers might have thought that this Corncrake welcome was typical and to be found commonly throughout the islands, but sadly it is not quite so simple.

In some parts of the west side of Lewis, and in Ness or Uig, we might be lucky and hear two or even three calling birds stridently attempting to outdo each other. Similarly, I have been captivated many times by calling birds throughout Uist, and (though to a much lesser extent) in several of the islands of the Inner Hebrides. Once, on a working visit to the west coast of Ireland, I was sung into wakefulness early on a calm morning by a noisy Corncrake just a short distance from my hotel room window. I felt that I had been surprised enthusiastically by an old friend, and that the day was about to burst into a flurry of joyful activity. 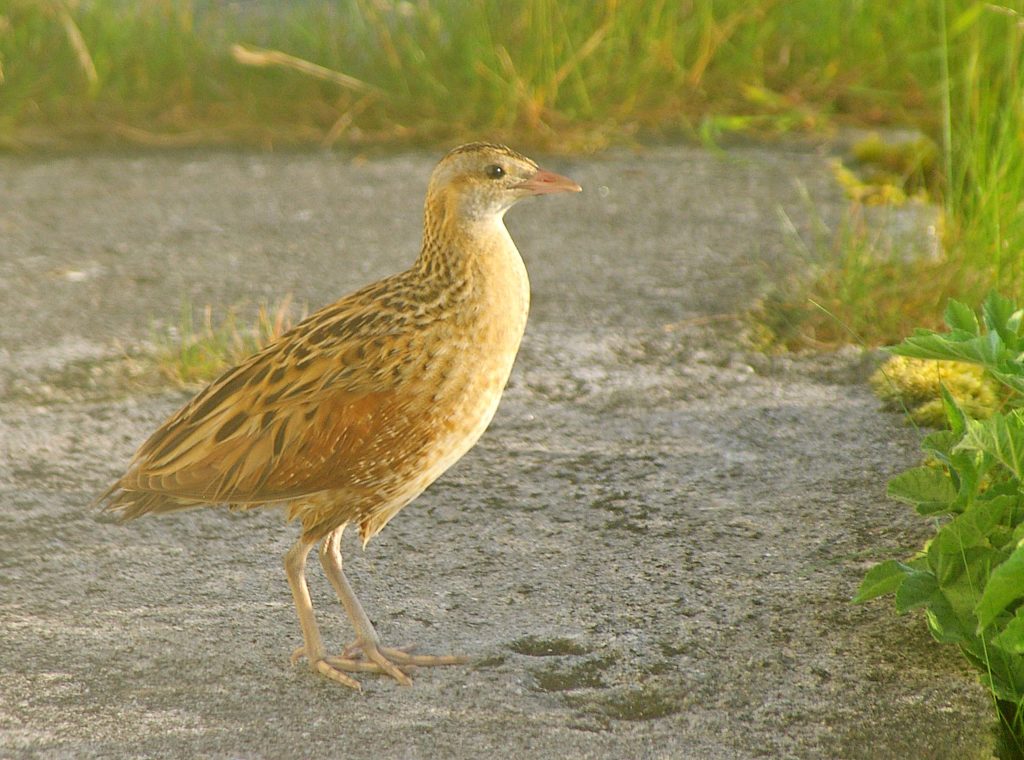 Unfortunately, those occasions seem to be getting less common and more geographically restricted with each passing decade. The reasons for this are complex and will be explored in detail later in this book. First, we need to understand the ecology of the Corncrake, and to place that ecology into the context of the functional landscapes of social and environmental change that successive generations of Corncrakes have experienced. To be able to make some sense out of these many interconnected pieces of information, the ecological story needs to be broken down into different themes that can be systematically linked. For example, habitat choice is linked to food supply and feeding behaviour, which in turn has an impact on breeding success, which in no small measure is related to that unique and assertive territorial call. In attempting to simplify into separate chapters the exploration of each of the main variables in the ecological patchwork that begins to explain the Corncrake, it is important to understand the closely-integrated dependence of each part upon the other parts. The Corncrake is both an emblem and a product of the cultural landscape – that manufactured and historical two-way interaction between rural humans and the environment of the countryside. Looking at one aspect without considering the others is like looking at an unfinished jigsaw.

Although each of us might regard these birds with a certain amount of geographical and proprietary interest, this is really an international and a transnational story. It is a story of global importance, and it is still developing. I have watched, listened to and read about the ecology of the Corncrake in a dozen different countries. I have tried to relate this information back to what it can tell us about the management of the Hebridean landscape, and what it might mean for the likely future of these intriguing, frustrating and sometimes comical birds.

The fact that the Corncrake is such an unobtrusive, retiring species is both its attraction and its potential undoing. Understanding the ecology of this bird from the scientific evidence available to us, including its place in the ecosystem (regional and global) and its significance as an icon representing a certain form of rural lifestyle and human ecology, will be the subject of the rest of this book. The curious thing, as many scientists will quickly tell you, is that the more we seem to discover about a subject, the less we actually know and the more we realise how much we still have to learn. Understanding the ecology of the Corncrake is such a subject.

The Corncrake by Frank Rennie is published by Whittles Publishing, priced £18.99.

‘I borrowed some money and booked an hour in a studio where I recorded twelve songs straight, one af …

The Arena of the Unwell

‘Am I paranoid, or are they really after me? I feel like we’re being hunted in here. This song has t …