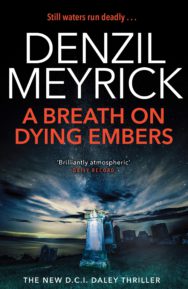 A Breath on Dying Embers

‘Plotting that mystifies, captivating characters and spectacular locations: the essentials, and A Breath on Dying Embers overflows with all three. The Gold Dagger awaits’ – Quintin Jardine

When the luxury cruiser, hastily renamed Great Britain, berths in Kinloch harbour, the pressure is on DCI Jim Daley. The UK Government are taking a high-powered group of businessmen and women on a tour of the British isles, golfing and seeing the sights, as part of a push for global trade. But when one of the crew goes missing, and an elderly local ornithologist disappears, will the pressure become too great?

The arrival of a face from the past, sends Daley’s world into a tailspin. And the lives of the passengers and crew of SS Great Britain, as well as the country’s economic future are in jeopardy. DS Brian Scott comes to the fore, and replete with a temporary promotion, is once more – most reluctantly, in his case – back at sea.

Daley faces a life and death struggle, but is this his last throw of the dice?

Denzil Meyrick was educated in Argyll, then after studying politics, joined Strathclyde Police, serving in Glasgow. After being injured and developing back problems, he entered the business world, and has operated in many diverse roles, including director of a large engineering company and distillery manager, as well as owning a number of his own companies, such as a public bar and sales and marketing company. D. A. Meyrick has also worked as a freelance journalist in both print and on radio. His first novel, Whisky from Small Glasses, was published by Ringwood in 2012.