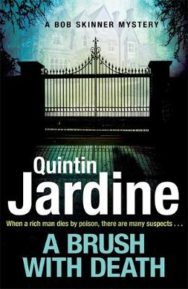 When millionaire Leo Speight is found poisoned, Scotland’s toughest cop is called in to solve the high-profile case…Skinner joins his old team in a complex murder investigation in the twenty-ninth gripping mystery in Quintin Jardine’s bestselling crime series. Praise for Jardine’s compelling novels: ‘A masterclass in how murder-mysteries ought to be written’ Scots MagazineWhen millionaire Leo Speight is found poisoned at his Ayrshire mansion, Police Scotland has a tough case on its hands. Speight was a champion boxer with national hero status, and a long list of lovers and friends stand to benefit from his estate. Did one of them decide to speed things up? Or was jealousy or rivalry the motive?The Security Service wants to stay close to the investigation and they have just the man to send in: ex-Chief Constable Bob Skinner. Skinner might have retired from the police, but solving crimes is in his blood. Combining forces with DI Lottie Mann and DS Dan Provan of Serious Crimes, he’s determined to see Speight’s murderer put away for a long time. But there’s a twist even Bob Skinner couldn’t see coming…’Well constructed, fast-paced, Jardine’s narrative has many an ingenious twist and turn’ Observer

Reviews of A Brush with Death (Bob Skinner series, Book 29)

I love the Bob Skinner novels. Quintin Jardine's slick and suspenseful Edinburgh-set series has never failed to keep me riveted… Starts with a bang and doesn't let up till the last sentence * Globe and Mail * More twists and turns than TV's Taggart at its best * Stirling Observer * Gritty cop drama that makes Taggart look tame * Northern Echo * If you're looking for a detective whose personal life is as active, contradictory and complicated as his job then follow the Edinburgh exploits of Deputy Chief Constable Bob Skinner in Quintin Jardine's Skinner series * Radio Times * Very engaging as well as ingenious, and the unraveling of the mystery is excellently done — Allan Massie * Scotsman * Deplorably readable * Guardian * Remarkably assured, raw-boned, a tour de force * New York Times * Well constructed, fast-paced, Jardine's narrative has many an ingenious twist and turn * Observer * A masterclass in how murder-mysteries ought to be written * Scots Magazine * Praise for Quintin Jardine: 'If Ian Rankin is the Robert Carlyle of Scottish crime writers, then Jardine is surely its Sean Connery' * Glasgow Herald * A plot with as many twists and turns as a highland road…an excellent addition to the series — www.crimereview.co.uk

Quintin Jardine was born once upon a time in the West – of Scotland rather than America, but still he grew to manhood as a massive Sergio Leone fan. On the way there he was educated, against his will, in Glasgow, where he ditched a token attempt to study law for more interesting careers in journalism, government propaganda, and political spin-doctoring. After a close call with the Brighton Bomb in 1984, he moved into the even riskier world of media relations consultancy, before realising that all along he had been training to become a crime writer. Now, forty novels later, he never looks back.Along the way he has created/acquired an extended family in Scotland and Spain. Everything he does is for them.He can be tracked down through his blog: http://quintinjardine.me